In Karnataka Bypolls, Congress Did Better Than Its Ally In Defeating BJP

BJP's vote share increased in the seats it was contesting against JD(S) but decreased where it was fighting against Congress candidates. 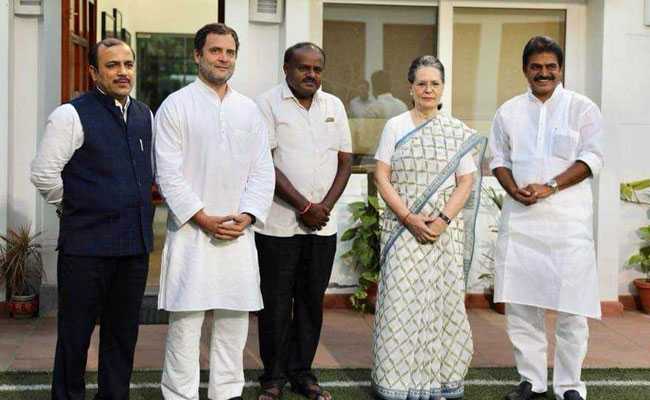 Chief Minister HD Kumaraswamy said that the alliance won because of "arithmetic".

However, it turns out that the arithmetic didn't work the same way for the two alliance partners. A close look at the results shows that the BJP's vote share increased in the seats it was contesting against the JD(S) but decreased in the constituencies where it was fighting against Congress candidates.

Nowhere was the BJP's loss more evident than in Bellary. In the assembly elections earlier this year, the combined vote share of the Congress and Janata Dal (Secular) in the eight assembly segments that fall under Bellary was 48.1 per cent, while the BJP's was 40.6 per cent

In the by-election, the Congress candidate VS Ugrappa got 60.1 per cent votes compared to 37.2 per cent votes polled by BJP's J Shantha. The gap between the alliance and the BJP increased from 7.5 per cent in May this year to 22.9 per cent six months later. Therefore the Congress seems to have benefited not just from a transfer of JD(S) votes but also a swing in its favour. The increase is even greater when compared to the 2014 Lok Sabha elections, which BJP won by a margin of 8.1 per cent.

A similar trend could be seen in Jamkhandi where the Congress' Anand Siddu Nyamagouda defeated BJP's Shrikant Kulkarni by a margin of 39,480 votes. In the assembly elections earlier this year, the combined vote share of the Congress and JD(S) was 32.6 per cent, compared to the BJP's 30.2 per cent, a narrow margin of just 2.4 per cent. In the by-election, however, the Congress got 61.8 per cent of the total votes polled against the BJP's 36.6 per cent, a gap of 25.2 per cent.

The gap between the alliance and the BJP decreased in the three seats that the JD(S) contested. In the Ramanagara assembly constituency, where Chief Minister HD Kumaraswamy's wife Anitha Kumaraswamy defeated BJP candidate L Chandrashekhar by a margin of 1.09 lakh votes. Despite Mr Chandrashekhar defecting from the BJP to the Congress just two days before polling, the BJP's votes increased from 4,871 in the assembly elections to 15,906 votes in the bypolls. In terms of percentage, it has increased from 2.8 per cent to 10.7 per cent of the total votes cast. The JD(S) candidate secured 84.4 per cent votes in the bypoll, a little less than the combined vote share of the JD(S) and Congress in the assembly elections, which was 94.7 per cent. The gap therefore reduced from 91.9 per cent to 73.7 per cent.

In Shimoga, BJP's BY Raghavendra, son of former chief minister BS Yeddyurappa, defeated Madhu Bangarappa of the JD(S) by 52,148 votes, a margin of 4.9 per cent. In the assembly elections, the combined vote share of Congress and JD(S) was 52.3 against BJP's 44.8 per cent, a gap of 7.5 per cent. BJP has managed to reverse the gap and win the seat.

However, the BJP's margin has reduced significantly from 2014, when Mr Yeddyurappa won the seat by 3.63 lakh votes or a gap of 32.1 per cent over his nearest rival. Even if we combine the Congress and JD(S) votes, the BJP still had a 15 per cent lead.

In Mandya, too, the BJP's vote share showed some improvement even though its candidate Siddaramaiah lost to JD(S)' LR Shivaramegowda by a margin of almost 3.25 lakh. In the by-election, the BJP got 27.6 per cent of the total valid votes cast, compared to JD(S)' 64.2 per cent, a gap of 36.6 per cent. In the assembly elections, BJP secured just 5.3 per cent of the votes in all the eight assembly segments of Mandya put together. The combined vote share of the alliance was as high as 91.5 per cent. Therefore the gap has reduced from 86.2 per cent to 36.6 per cent. Even in the 2014 Lok Sabha election, the gap between the combined vote share of the Congress and JD(S) and the BJP was 80.1 per cent.

Both Mandya and Ramanagara fall in the Old Mysore region, where the BJP is considered weak and contest mostly took place between the JD(S) and the Congress. With the two parties contesting in alliance, the BJP seems to have managed to grab some of the opposition space.