Karnataka Forest Department officials rescued an elephant after it fell into a mud pit in Kodagu district. 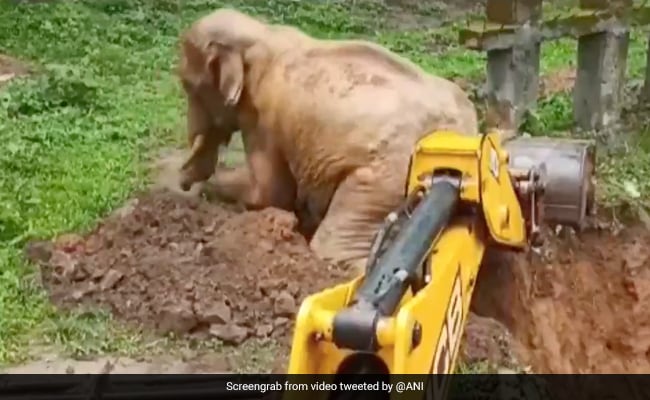 The officials stretched a hand of the JCB machine to push the elephant from behind.

A dramatic video of how forest department officials in Karnataka helped an elephant get out of a pit, using the “hand of God” is being widely shared on social media. The officials stretched a hand of the JCB machine to push the elephant from behind in its endeavour to climb up the mound of loose earth.

At first, the elephant resisted the help by swinging its trunk, but then accepted the help to slowly get out of the pit. After safely getting out of the pit, the animal turned around to fight the machine, mistaking it as a threat due to stress.

After a few seconds of gentle pushing and shoving, it retreated back into the forest. The officials also burst a small craker to nudge it away from the area and prevent any further escalation in tension with the elephant.

Third JCB shows what hand of god means. FD team able to rescue this gentle giant, though he tried to fight in the last. From Coorg. @sats45@JCBmachinespic.twitter.com/vVzlaa4WA7

In end there is a nudge for him to run Away in form of small cracker. Otherwise it could attack the rescuers or could have fallen again in the pit. Now he is safe & back to Forest.

Every such rescue demands on the spot strategy. Great work by team.

His "Hand of God" reference was a spin on the phrase used by football legend Diego Maradona to describe a goal that he scored during the Argentina vs England quarter final match in 1986 World Cup.

The video has been “liked” by more than 6,000 Twitter users, including the official handle of JCB machines. It has been viewed more than 67,000 times.

Many Twitter users praised the effort by forest department officials and also had fun watching the elephant refusing outside help initially.

Wondering why did he try to attack rescuers? Used to see elephants showing gratitude towards humans for rescuing them.

That was brutal power. He could have crushed that JCB.

Great job, in such cases instead of questioning the team that had to take decisions in seconds, we should go by the end result. Which here was a happy one :)

He came back to say Thank You also. :)

Often, forest department officials have to make quick decisions to successfully conduct a rescue operation in remote areas, where the availability of resources is limited. They innovate and try to salvage the situation from going worse.

Recently, forest officials rescued an elephant calf stuck in slush in Moleyur range of Bandipur Tiger Reserve in Karnataka. Using an earthmover, they pushed the animal gradually towards the edge of the slush where the ground was less slippery and helped it stand on its feet.