The Supreme Court on Wednesday upheld the disqualification of 17 Congress-JD(S) MLAs in Karnataka by the then Assembly Speaker KR Ramesh Kumar but paved the way for them to contest the by-polls. 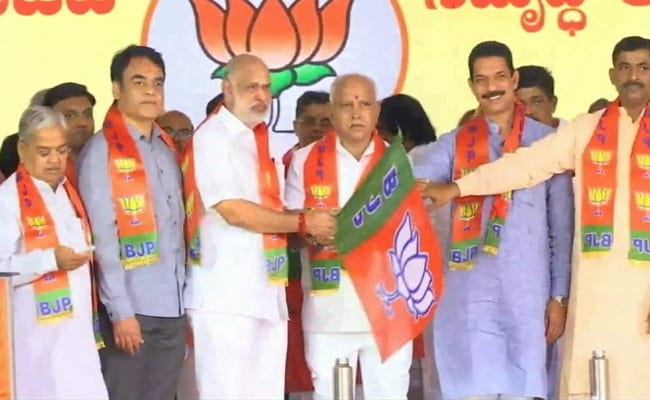 A day after the Supreme Court paved the way for them to contest the December 5 assembly bypolls in Karnataka, 16 disqualified Congress-Janta Dal (Secular) legislators on Thursday joined the BJP.

Chief Minister BS Yediyurappa and state BJP chief Nalin Kumar Kateel were among those who welcomed them into the party.

Seventeen legislators, including seven-time legislator Roshan Baig of the Congress, had withdrawn support from the Congress-Janata Dal (Secular) coalition government, leading to its collapse in July. The two parties had then alleged that the BJP deliberately lured the MLAs as part of "Operation Lotus".

Roshan Baig, a disqualified Congress legislator from Shivajinagar, was the only disqualified legislator who was not inducted into the party today. According to news agency PTI, the party leadership cited "reservations" over Mr Baig, who is facing inquiry in the IMA ponzi scam, among the reasons for his non-induction.

In an effort to serve the People more effectively,16 former MLAs are beginning a new journey with BJP from today.

Under the leadership of President @nalinkateel and CM @BSYBJP, we wholeheartedly welcome them to Our Party, and wish them the very best. pic.twitter.com/80qAYhqrIN

The BJP is likely to filed most of the disqualified legislators in the 15 constituencies where bypolls will be held on December 5.

The first indication in this regard came from Mr Yediyurappa, who said: "Whatever promise we have given, we are going to fulfil. All our BJP workers will work day and night. And all 15 MLAs who are going to contest, they are going to win, 100%".

Of the 15 constituencies, 12 were represented by Congress and three by JD(S). BJP needs to win at least six out of those 15 seats to remain in power.

Senior Congress leader Siddaramaiah warned that the BJP will be "punished" if it fields the disqualified legislators in the bypoll elections. "If you go by morality, the BJP should not give the tickets to them. If you look at the morality point of view, they are not eligible to contest the election. Ultimately, the people's vote will punish him," he said. Fourteen of the 17 disqualified legislators are fromthe Congress party.

Former Karnataka chief minister HD Kumaraswamy, who led the 14-month-old coalition government before it crashed in July, was also critical on the BJP. "Giving permission to all these MLAs to contest elections, what is the use of the defection bill? There is no doubt about their getting BJP tickets," he said.

The Supreme Court on Wednesday upheld the disqualification of 17 Congress-JD(S) MLAs in Karnataka by the then Assembly Speaker KR Ramesh Kumar but paved the way for them to contest the by-polls.

While upholding their disqualification, the top court set aside the portion of the orders by the then speaker by which the legislators were disqualified till the end of the the current Assembly's term in 2023.