The outrageous comment was made during a discussion on farmers' issues when Speaker Vishweshwar Hegde Kageri questioned how the session can be conducted if time was allotted to everyone. 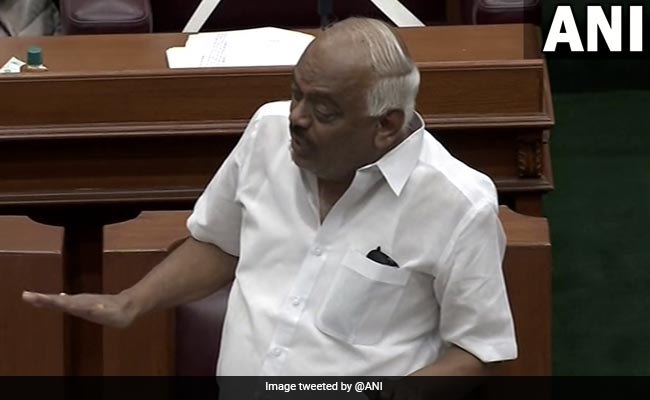 Congress MLA KR Ramesh Kumar has apologised for the comment.

Hours after his reprehensible "enjoy rape" remark triggered massive outrage, a senior Congress leader in Karnataka on Thursday apologised for what he called his "indifferent and negligent" comment in the state assembly. Controversially, he described it as an "off-the-cuff remark" in his clarification.

"My intention was not trivialise or make light of the heinous crime, but an off-the-cuff remark! I will choose my words carefully henceforth!" Congress MLA KR Ramesh Kumar wrote in a tweet last night.

The outrageous comment was made during a discussion on farmers' issues when Speaker Vishweshwar Hegde Kageri questioned how the session can be conducted if time was allotted to everyone.

"Whatever you decide - I will say yes. What I am thinking is that let us enjoy the situation. I can't control or regulate the system. My concern is about the business of the house, it has also to be covered," he asked.

To this, the Congress MLA said: "There is a saying that when rape is inevitable, lie down and enjoy it. That is exactly the position which you are in." Shockingly, others in the state assembly laughed in response.

I would like to express my sincere apologies to everyone for the indifferent and negligent comment I made in today's assembly about "Rape!" My intention was not trivialise or make light of the heinous crime, but an off the cuff remark! I will choose my words carefully henceforth!

But the comment was later met with huge criticism. "The comment is obnoxious and outright disgraceful. He is a serial offender while he was the Speaker of the assembly he had made a similar comment. Now again, he has repeated it. The Congress, which has always claimed it is there for women's safety and security, must immediately initiate action against this serial offender." BJP leader S Prakash remarked.

In the state assembly, the Congress leader today said, "If it (my comment) hurts the sentiments of women, I've no problem apologising. I apologise from the bottom of my heart."

The apology was backed by the Speaker who was seen laughing at the comment: "He has apologized, let's not drag it further."

Just minutes before he had refused to make any comment as journalists tried to question him outside the assembly, a video tweeted by news agency ANI showed.

#WATCH | Bengaluru: Karnataka Congress MLA Ramesh Kumar evades reporters' questions on if he will apologise for his 'rape' remark made in the state Assembly, yesterday. pic.twitter.com/kUS1IVnIUx

Speaker as custodian & Sr legislators are expected to be role models & should desist from such unacceptable behaviour.

This is not the first time that Mr Kumar, 72, has made such an objectionable comment. In 2019, he had compared himself to a "rape survivor".

Pointing to repeated reference to charges against him on being part of some controversial audiotapes, he said his "situation was like that of a rape victim, as they too are supposedly questioned about the incident repeatedly".

Earlier this year, Karnataka Home Minister Araga Jnanendra's questionable reaction to the Mysore rape case, which sparked huge protests, had also led to criticism. The gang-rape victim and her male friend should not have gone to the deserted place, he had said.

The insensitive comments from elected representatives come even as the country continues to see an uptick in crimes against women.

Data released by the National Crime Records Bureau earlier this year showed that India had recorded an average of 77 rape cases daily in 2020.

In Karnataka, the state police data showed 1,168 rape cases were reported across the state between January 2019 and May 2021 - an average of at least one rape a day.