"Never Heard Of Poisoned Prasad": Siddaramaiah After 11 Dead In Karnataka

Devotees at Kichu Maranda temple, around 160 km from Bengaluru, were poisoned after eating a rice-based offering 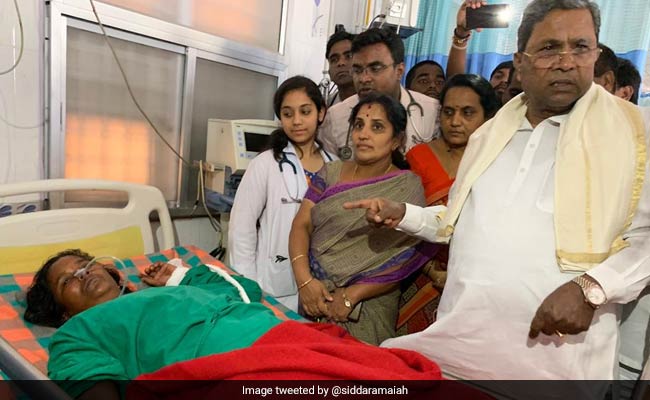 Outside the emergency ward of KR hospital in Mysuru, families are fighting back tears and worrying for their loved ones. Those who fell sick after consuming poisonous temple prasad that claimed 11 lives in Chamarajnagar district of Karnataka were brought here, some in critical condition. They are being treated for vomiting, diarrhoea and respiratory distress.

Devotees at Kichu Maranda temple, around 160 km from Bengaluru, felt sick after eating a rice-based offering. A devotee who was present at the temple said they were given tomato rice and flavoured water. Among the dead are two children.

Doraiswamy, whose elderly mother has been admitted here, said she had not gone to the temple, but had eaten the prasad brought to her by others. He told NDTV, "Doctors say she is better now."

He wants those responsible to be punished. "They should be brought to the village and then punished," he said.

Those who survived are relieved. But families who lost their loved ones are inconsolable. And yet others whose family members are still not out of danger are worried.

"My daughter Sangeetha is in the hospital. She seems to be getting better. But my grandson has been taken to another hospital. I am worried," said Kulamma.

"Sangeetha's father-in-law ate at the temple and packed food for his daughter-in-law and grandchild. They had it before he started feeling sick. They realised something was wrong. He died soon after. Sangeetha is getting better, but the child is in a serious condition," said Raju.

Perumal's mother and two aunts had also eaten at the temple and rushed to the hospital when they started feeling sick. "Their condition is better than yesterday(Friday)," he told NDTV.

Many crows have also been found dead, reportedly after eating the prasad, suggesting that the food was deliberately poisoned. The police have detained two men and are looking for five more suspects.

Dr CP Nanjaraj, Dean and Director, Mysore Medical College & Research Institute, told NDTV, "We are treating patients for organophosphorus poisoning, a pesticide. We are waiting for the forensic science laboratory report. Since dogs and birds have also died, we are ruling out food poisoning."

The patients were taken to both government and private hospitals. KR Hospital has 13 ventilators, all of which are being used.

BB Kaveri, Deputy Commissioner (DC) of Chamarajanagar district, told NDTV, "Two men have been detained. The investigation is still on. We have moved all the patients from Chamarajnagar to Mysuru for further treatment. Many of them needed ventilators."

Mr Siddaramaiah tweeted, "I have never heard of temple prasada being poisoned. The incident of this magnitude with 11 people dead and 80-90 people hospitalised with some in critical condition is something unimaginable."

I have never heard of temple prasada being poisoned. The incident of this magnitude with 11 people dead and 80-90 people hospitalised with some in critical condition is something unimaginable. I am shocked over the tragedy. It's a most inhuman act.
1/3

High level investigation has to be carried out to ensure justice to the victims. Priests & the management of temples should be extra cautious in ensuring the safety of the prasada before distributing to the devotees.
2/3

Doctors are doing their best to save the patients. Those admitted in ICU are being closely monitored. I have told the doctors to provide best treatment, even if it is providing treatment in private hospitals since the government has announced to bear the cost.
3/3

Puttaranga Shetty, the minister in charge of Chamarajanagar visited a hospital where those affected are undergoing treatment. He said a dispute between two groups could be the reason for poisoning.

The state government has announced Rs 5 lakh each for the families of the dead.