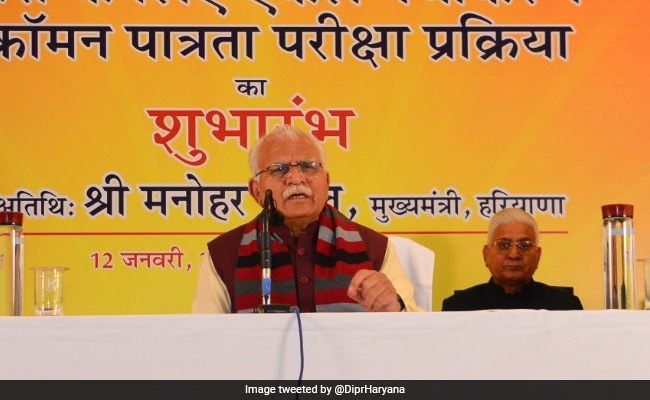 "The selection for the Group D posts would be made on the basis of merit of Common Entrance Test (CET) including marks under social-economic criteria and experience, whereas in case of Group C posts, the candidates would also have to clear the departmental examination in addition to the CET. The weightage under socio-economic criteria would not be more than 10 per cent for Group-D posts and 5 per cent for Group-C posts," an official statement said.

"With the launch of One Time Registration Portal, youth would be required to apply and submit fees on the Portal only once which would be Rs 500 for general category candidates and Rs 250 for candidates belonging to reserved categories," Mr Khattar said. He also said that this move of the State Government would not only bring about more transparency but also speed up the recruitment process.

Speaking on the occasion, Bharat Bhushan Bharti, Chairman, HSSC, said that while One Time Registration Portal would not only provide an opportunity to the job aspirants to apply and pay fees only once and it would also give them respite from making frequent rounds to the Commission office for document verification, the Common Eligibility Test (CET) would go a long way in the recruitment of quality manpower.

The registration process on the website has begun and will continue till March 31. Students who are appearing for Class 10th and 12th examination this year could also provisionally apply on the portal, the official statement has said.

According to the statement, the One Time Registration Portal will be integrated with the Parivar Pehchan Patra (PPP) and the details of the family members of the candidate would be automatically generated while filling up the form. The candidates would also have the facility to update the family details on the portal. Haryana government issues Parivar Pehchan Patra to Haryana domicile only; the domicile certificate is issued to those who have been residing in the state for the last 5 years.

The Union government, in August 2020, had approved the formation of a national recruitment agency that will hold a common eligibility test for selection to various government jobs. The states were told they can consider the exam for selection to jobs under the state government.