"All kind of restrictions in these five districts of Jammu, Kathua, Samba, Udhampur and Reasi have been withdrawn and all educational institutes have reopened today," the senior official said. 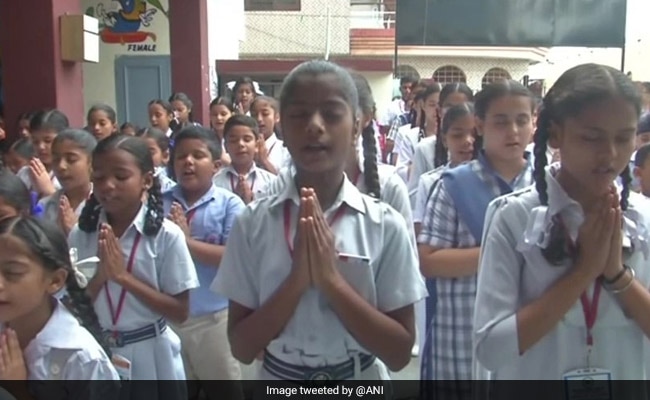 Prohibitory orders under CrPC section 144 were lifted in five Jammu districts and restrictions were relaxed in Doda and Kishtwar, paving the way for resumption of normal activities that were badly hit after special status of Jammu and Kashmir was abrogated, officials said today.

All schools and colleges reopened in five districts of the Jammu region, besides increase in attendance in government offices, a senior official said.

"All kind of restrictions in these five districts of Jammu, Kathua, Samba, Udhampur and Reasi have been withdrawn and all educational institutes have reopened today," the senior official told news agency Press Trust of India. All schools and colleges have reopened in five districts of the Jammu region ((Photo of Sri Ranbir Model Higher Secondary School, Jammu)

He said the situation is limping back to normalcy as there was no report of any untoward incident from anywhere in the region since August 5, when the restrictions were imposed.

#WATCH SRINAGAR: Visuals from yesterday evening near Dalgate area of the city. #JammuandKashmirpic.twitter.com/4dToNjWu3q

All the market places and shops reopened and traffic has resumed as normal in all these districts bringing much relief to the people.

Friday prayers passed off peacefully in Jammu and Srinagar, the officials said.

SRINAGAR: Locals offering prayers at a mosque in the city, yesterday. #JammuAndKashmirpic.twitter.com/JQZOswZZSL

Restrictions, however, continued to be in place in Poonch, Rajouri and Ramban districts, the officials said.

The administrations of 10 districts in the Jammu region had imposed prohibitory orders under CrPC Section 144 on August 5 in view of the Centre's move, according to an official order.

District Development Commissioner of Kishtwar Angrez Singh Rana said the restrictions were relaxed for one hour in a phased manner in different parts of the town for the first time since its imposition on Monday.

The officials said the curfew was also relaxed in Bhadarwah town and its adjoining areas in Doda district in a phased manner.

The situation in Ramban, Poonch and Rajouri districts was also normal and people offered Friday prayers in a peaceful manner amid heavy deployment of forces to maintain peace, the officials said.