Watch: "4-Legged Friend" Welcomed By Minister On Flight Out Of Ukraine

General VK Singh is one of the Union Ministers overseeing the evacuation of Indians via several countries neighbouring Ukraine. 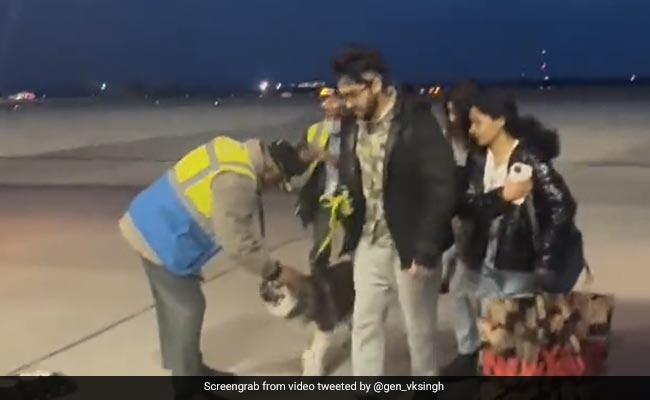 One of the evacuees out of Ukraine via Poland got a special welcome.

As India evacuated hundreds of more students on Wednesday from war-hit Ukraine, Union Minister General VK Singh was seen welcoming a "four-legged friend" onboard one of the Air Force flights out of Poland.

He posted a video on Twitter of his encounter with the canine evacuee.

Some of the evacuees brought their four legged best friends as well.

Good to have all of our #IndianStudents aboard on the @IAF_MCC C-17 Globemaster ready to return to the safety of our motherland.#OperationGanga#NoIndianLeftBehind@PMOIndia@narendramodipic.twitter.com/XprDh0p57K

General Singh is one of the Union Ministers overseeing the evacuation of Indians via several countries neighbouring Ukraine and was at the Rzeszow Airport in Poland on Wednesday with a C-17 Globemaster aircraft.

Great to see the happiness and relief written large on the faces of our #IndianStudents.

Soon, you all will be with family, friends, and more importantly, in the country you call your own.

In videos posted on social media, he was seen welcoming Indian students on board the flight.

Koo App
Here at Rzeszow Airport in Poland where the impressive and dependable C-17 Globemaster has been called to take our students back home. Two Indigo flights also adding to the numbers being brought back. #operationganga
View attached media content
- General V K Singh (@genvksingh) 2 Mar 2022

As fighting intensified in Kharkiv, India on Wednesday asked its nationals to leave the second-largest Ukrainian city urgently to three nearby places "even on foot", while Russia promised to create "humanitarian corridors" for evacuation of Indians from the conflict zones.

Four C-17 Globemaster aircraft of the Indian Air Force, including the one from Poland, with approximately 800 evacuees from Ukraine are slated to land at the Hindon airbase on Thursday, sources told news agency PTI.

"We now estimate that nearly 17,000 Indian nationals have left Ukraine's borders since our advisories were issued. This of course includes some Indians who had not registered with the embassy earlier," External Affairs Ministry Spokesperson Arindam Bagchi said at a briefing.

Earlier, the MEA had said that 20,000 Indians were in Ukraine when India had issued the first advisory in mid-February when the tension between Russia and Ukraine started building up.

About the evacuation mission, Mr Bagchi said flights under 'Operation Ganga' have increased sharply and that six flights have landed in India in the last 24 hours taking the total to 15.

He said the total number of Indians who have returned on board these flights is 3,352. Out of these, 1,796 were evacuated through Romania, 430 through Poland and 1126 through Hungary.