Sikh Group Ties "Over 9,000 Turbans" In US, Set World Record

The Sikhs of New York organised Turban Day as part of the annual mid-April celebration of Vaisakhi, which is commemorated by millions of Sikhs annually. 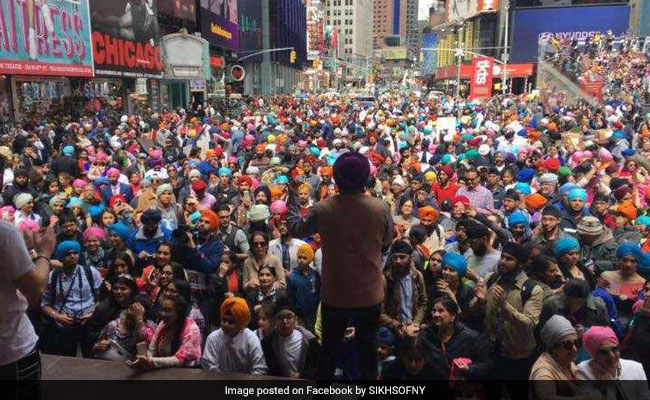 New York: A Sikh organisation in the US has created a world record by tying thousands of turbans within a few hours as members of the community commemorated the annual Turban Day at the iconic Times Square in New York, spreading awareness about the faith amid incidents of hate crimes against the community.

The Sikhs of New York organised Turban Day as part of the annual mid-April celebration of Vaisakhi, which is commemorated by millions of Sikhs annually.

This year, the organisation was aiming to set a world record for tying the most turbans during the day-long celebration in Times Square on Saturday.

Chanpreet Singh, the founder of the non-profit organisation, told PTI that they tied over 9,000 turbans and are "thrilled" to set the world record for tying thousands of turbans in a few hours.

The organisation won a certificate from the Guinness World Record for the "most turbans tied in 8 hours was achieved by Sikhs of NY (USA) in Times Square in New York, USA on April 7, 2018."

The Turban Day brought together hundreds of volunteers from the Sikh community who tie colourful turbans on New Yorkers, tourists and Americans from across the country visiting Times Square.

While tying the turbans, they also talked about Sikh identity, making people aware of Sikh culture.

The event has been aimed at spreading awareness among Americans and other nationalities about the Sikh religion and its articles of faith, especially the turban, which has often been misconceived and misidentified as being associated with terrorism particularly in the years since the 9/11 terror attacks.

Sikhs of New York said thousands of New Yorkers and visitors from around the globe crowd into Times Square and came away for the first time wearing a turban on their head and learned about Sikhism, one of the largest religions in the world. 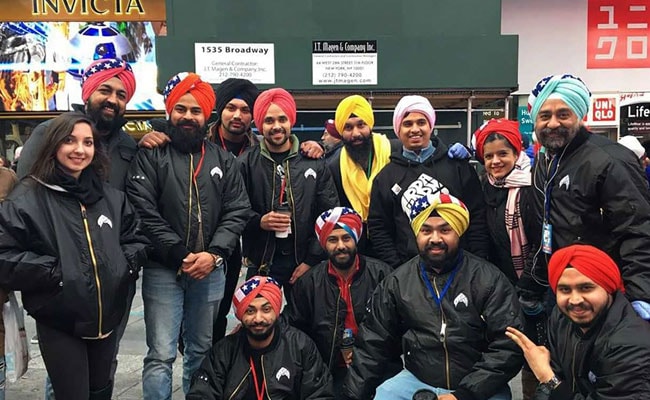 Members of Sikhs Of New York, who won the Guiness World Record for tying the most number of turbans (PTI)

"On Turban Day, we tied turbans regardless of age, colour, gender or race," Mr Singh said.

"These are core Sikh values and American values that make us Sikh Americans. Our diversity is our strength.

The Turban Day has been commemorated in New York since 2013 to educate people about Sikhism, which preaches equality of mankind and all human beings.

Representatives from Guinness World Record judged the event in Times Square and presented the organisation with a successful world record breaking attempt by tying the most turbans in one place in the world.

"We greatly appreciate the many volunteers who lent their time and contributed generously to support Turban Day," Mr Singh said.

"This educational endeavour would not be possible without our hundreds of volunteers and supporters."

Last year, a proclamation by Congressman Gregory Meeks of the 5th Congressional District of New York had declared April 15, 2017 as 'Turban Day', lauding The Sikhs of New York for its dedication in educating other communities about the Sikh faith.

Those who got the turbans tied, including young children, were seen excitedly taking pictures and proudly walking around with their new head gear.

Cheryl Mendz, a young student, said she got the turban tied on her head as she liked exploring different cultures.

She added that the message of the organisation that Sikhs should not be targeted in hate crimes because of their identity is "amazing". "Everyone should be treated equally, everyone should be welcome no matter what religion you believe in, she said.

Promoted
Listen to the latest songs, only on JioSaavn.com
Sporting a pink turban, Natasha Zenger said, It's nice to embrace a culture that is different from one's own."

According to Sikh rights group Sikh Coalition, in the 15 years following 9/11, Sikhs remain hundreds of times more likely to be targeted in cases of profiling, bigotry and backlash than the average American.