Indian-Origin Diplomat Uzra Zeya Is US Special Coordinator For Tibet 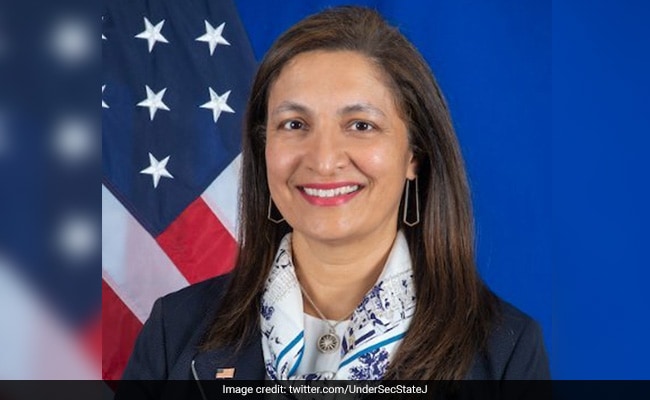 Uzra Zeya is also the Under Secretary for Civilian Security, Democracy, and Human Rights.

The US has designated Indian-origin diplomat Uzra Zeya as its Special Coordinator for Tibetan Issues and she has been tasked with promoting "substantive dialogue" between China and the Dalai Lama or his representatives in support of a negotiated agreement on Tibet.

Zeya, who was once posted in New Delhi during her diplomatic career, had quit the foreign service in 2018 in protest against the policies of then president Donald Trump.

She is also the Under Secretary for Civilian Security, Democracy, and Human Rights.

As the US Special Coordinator for Tibetan Issues, Zeya will coordinate the US government policies, programmes and projects concerning Tibetan issues, consistent with the Tibetan Policy Act of 2002, as amended by the Tibetan Policy and Support Act of 2020.

“I have designated Under Secretary for Civilian Security, Democracy, and Human Rights Uzra Zeya to serve concurrently as the United States Special Coordinator for Tibetan Issues, an important role she will take on effective immediately,” US Secretary of State Antony Blinken said.

She will also continue to serve as Under Secretary for Civilian Security, Democracy, and Human Rights, a position for which she was sworn in on July 14, 2021, he said in a statement.

“Specifically, she will promote substantive dialogue, without preconditions, between the Government of the People's Republic of China (PRC) and the Dalai Lama, his representatives, or democratically elected Tibetan leaders in support of a negotiated agreement on Tibet,” according to the US Department of State.

China is accused of suppressing cultural and religious freedom in Tibet. However, China has rejected the accusations.

Negotiations between China and the representatives of the Dalai Lama on the Tibet issue have not taken place in recent years.

Since becoming China's President in 2013, Xi Jinping has pursued a firm policy of stepping up security control of Tibet.

Beijing has been cracking down on Buddhist monks and followers of the Dalai Lama, who despite his exile remains a widely admired spiritual leader in the remote Himalayan region.

Beijing views the 86-year-old Dalai Lama as a separatist.

Last month, China's ruling Communist Party appointed Wang Junzheng, sanctioned by the US, Britain, the EU and Canada for his alleged role in the human rights violations against Uygur Muslims in Xinjiang, as the head of the party unit in Tibet.

The Dalai Lama has been living in India in-exile ever since he fled Tibet in 1959 following China's takeover of the Himalayan region.

Zeya will promote respect for the human rights and fundamental freedoms of Tibetans, including their freedom of religion or belief, and will support efforts to preserve their distinct historical, linguistic, cultural and religious heritage, the State Department said.

She will further support US efforts to address the humanitarian needs of Tibetan refugees and diaspora communities, including those in the US who have faced threats and intimidation instigated by China, it said, adding that the special coordinator will promote activities to protect the environment and sustainably manage the water and other natural resources of the Tibetan plateau.

“Consistent with the Reciprocal Access to Tibet Act of 2018, she also will seek to increase access to Tibet for US officials, journalists and other citizens.

“Special Coordinator Zeya will work closely with Tibetan cultural, religious, and political leaders, the US Congress, international allies and partners, and civil society representatives on these matters,” the state department said.

This designation demonstrates the Biden administration's commitment to advance the human rights of Tibetans, help preserve their distinct heritage, address their humanitarian needs, and meet environmental and water resource challenges of the Tibetan plateau, it added.

In April, while introducing Zeya during her confirmation hearing for the position of Under Secretary of State for Civilian Security, Democracy, and Human Rights, Senator Tim Kaine said that Zeya has previously served five presidents, three Republicans and two Democrats, with distinction for 28 years as a foreign service officer on four continents.

She's fluent in Arabic, French and Spanish. She was acting assistant secretary of human rights, democracy, and labour. In that post, she led UN-US human rights dialogue with China, Egypt, and Bahrain, among others, he said.

Zeya had told lawmakers that her grandfather was a freedom fighter in India.

She is a graduate of the Georgetown University School of Foreign Service.