Indian-American Woman Running For US Senate Raises $100,000 In Campaign Donations

Usha Reddi who is seeking nomination from the Democratic party, migrated to the US along with her parents in 1973 from Andhra Pradesh when she was 8. 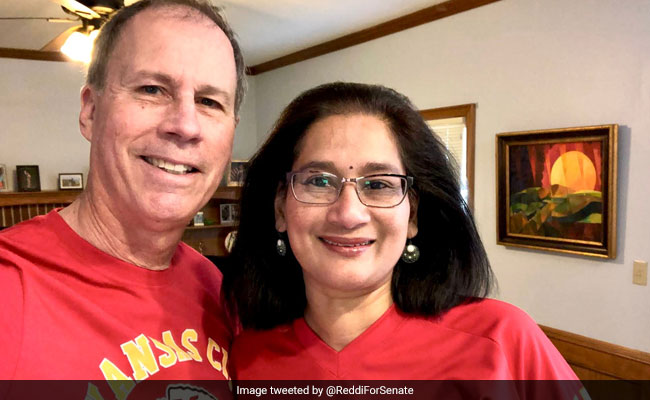 Usha Reddi was sworn in as the Mayor of Manhattan city in Kansas last month.

Usha Reddi, Indian-American Manhattan city mayor who is running to enter the Senate from the US state of Kansas, has raised over $100,000 in campaign donation.

Usha Reddi, 54, who is seeking nomination from the Democratic party, migrated to the US along with her parents in 1973 from Andhra Pradesh when she was eight.

She was sworn in as the Mayor of Manhattan city in Kansas last month.

The current Republican incumbent Senator Pat Roberts has announced not to seek re-election, making it an open seat this November.

Kansas, a Republican stronghold, has never elected a Democrat since 1932.

Four candidates including her are running for the Democratic party primaries to be held on August 4. Seven Republicans are vying for the Republican primary.

By vocation a teacher and education union leader, Reddi has twice been elected to four-year terms on Manhattan's City Commission. On January 7, she began her second term as a mayor.

In July 2019, 40 years after her father Venkata Yeleti, 77, assaulted her, he was convicted of felony rape and was sentenced in Virginia. Reddi strongly feels that it is important to embrace her past and take control of her destiny.

"If I can put my dad away after 40 years, everything else seems OK," Reddi recently told Kansas City in an interview. Running for the US Senate from a Republican bastion is considered to be an uphill task. I understand it''s an uphill battle, but everything in my life has been an uphill battle," she said.

The first Indian-American to serve as a mayor in Kansas, Reddi is the first Kansas mayor to simultaneously run for the US Senate. She is also the first woman of colour to run for an office representing the entire state.

According to a statement issued by her campaign, Reddi has so far raised more than USD 100,000 in her Federal Election Commission.
"It''s an honour to engage with Kansans on the important issues we face. I believe their support is based on the trust built through these contacts," she said in the statement.

Last month, she received the Elected Women of Excellence Award from the National Foundation of Women Legislators.