Pinky Panchal and Niket Aggarwal, who own Super 8 motel in Ridgecrest city said, "..we had this little shake at 8:05 so went out, we went back in and right after that what we saw was massive." 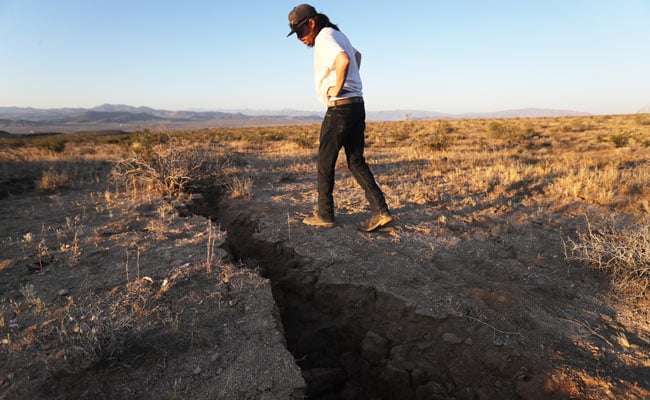 The latest earthquake struck 18 km northeast of Ridgecrest, according to the US Geological Survey. (AFP)

As a powerful 7.1-magnitude earthquake rocked buildings across southern California, an Indian-American owner of a motel in Ridgecrest town on Friday said she thought they were not going to survive as the whole roof of the building would collapse on her and the guests.

The latest earthquake on Friday struck 18 kilometres northeast of Ridgecrest, according to the US Geological Survey. It was five times bigger than Thursday's 6.4 -magnitude earthquake, which was also centred near Ridgecrest, US media reported.

Speaking to news organisation CNN, Pinky Panchal and Niket Aggarwal, who own Super 8 motel in Ridgecrest city said, "I was checking a customer in and I was at the front desk and we had this little shake at 8:05 so went out, we went back in and right after that what we saw was massive.

"I just started crying, I just felt whether we are going to survive this or not, and then like every moment I was feeling that it was and we just ran to the Super 8 sign. We and other guests just held each other tight we were waiting for the shakes to stop," Ms Panchal said.

In Los Angeles, about 240 kilometres away from Ridgecrest, residents felt the earth shake, but there were no reports of serious damage, Mayor Eric Garcetti said.

There were some wires down and localised power outages, the Los Angeles County Fire Department said. It said there was no major infrastructure damage, no deaths and no serious injuries reported.
California Institute of Technology seismologist Lucy Jones said Friday that both earthquakes are part of an ongoing sequence, of a "very energetic system."

The latest 7.1-magnitude earthquake was the mainshock, while Thursday's 6.4-magnitude quake was a foreshock, Ms Jones said. She said Friday's earthquake was 10 times stronger than the one a day prior.

Miller said it released more than 11 times the amount of energy than the 6.4 one.

Officials are not ruling out the possibilities of more earthquakes.

California Governor Gavin Newsom said he has activated the state emergency operation centre to its highest level. "The state is coordinating mutual aid to local first responders," he tweeted.