In New York, people gathered at the Governors Island in the backdrop of the iconic Statue of Liberty to participate in the Yoga Day celebration. 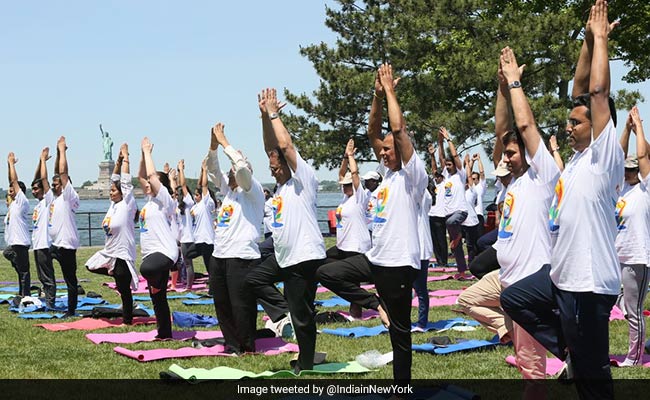 Yoga day designed kits and T-shirts were distributed to those in attendance.

Washington/New York: Hundreds of yoga enthusiasts  gathered to flex their body at historic monuments of the US, including the Capitol Hill, kick-starting a host of events planned this week to mark the fourth anniversary of the International Day of Yoga.

In New York, people gathered at the Governors Island in the backdrop of the iconic Statue of Liberty and the Manhattan skyline to participate in the Yoga Day celebration organised by the Consulate General of India.

The two-hour event 'Let Yoga Govern Your Life' organised yesterday by the Consulate General of India in New York, included meditation and a guided yoga session based on 'Common Yoga Protocol' conducted with the help of yoga demonstrators and teachers.

Among the highlights of the event was an impressive Mallakhambh performance by children. Yoga day designed kits and T-shirts were distributed to those in attendance.

Addressing the gathering, Congresswoman Carolyn Maloney, the Chief Guest for the event, said yoga is a "unique way" to approach an individual's health and well-being. A yoga practitioner herself, Ms Maloney said she considers the ancient practice one of the best ways to exercise and relax at the same time.

"Practicing yoga has been shown to decrease stress, fatigue, and alleviate chronic pains, as well as improving physical fitness. I know first-hand the benefits of practicing yoga. It is an essential part of my life, I practice it as often as I can, and it helps me to find balance and peace," she added.

India's Consul General in New York Ambassador Sandeep Chakravorty highlighted yoga's universal appeal and the role of the ancient Indian practice in bringing together the cultures and people of America and India.

"Nothing better connects the two countries than yoga because it epitomizes and is a good example of our relationship, that something which originated in India is so popular here. Celebrating the 4th International Yoga Day sends out a big message of the importance of yoga in our daily lives" in both the US and India and across the world, Mr Chakravorty told PTI.

Mr Chakravorty, who joined those present in performing various yoga and meditation exercises, said the extent to which yoga now permeates people's lives is tremendous. Referring to hour-long yoga sessions organized daily at the World Trade Centre buildings, he said yoga has now become part of the corporate culture. Yoga is a rapidly growing trend in the US with an 80% increase in practitioners between 2012 and 2015, according to estimates.

In Washington, hundreds of health enthusiasts gathered at the iconic US Capitol Saturday morning to flex their body under the guidance of a trained Indian yoga teacher.

This venue at the Capitol Hill where presidential swearing in ceremonies are held every four years, this morning experienced one of the largest gatherings of yoga exercises in Washington DC.

"It shows that huge enthusiasm that yoga has gathered among all of us and all over the world,"  Indian Ambassador to the US Navtej Singh Sarna said in his brief remarks to the participants of the fourth International Day of Yoga who had gathered since early morning with their yoga mats at the Capitol overlooking the National Mall.

"I think, the day is not far that you will have the whole space between the monument and the Capitol filled up," Mr Sarna told reporters thereafter.

He said that yoga was always a popular discipline, but "qualitative and quantitative change" has come since 2014 when under the guidance and inspiration of Prime Minister Narendra Modi, the United Nations recognized June 21 as the International Day of Yoga. 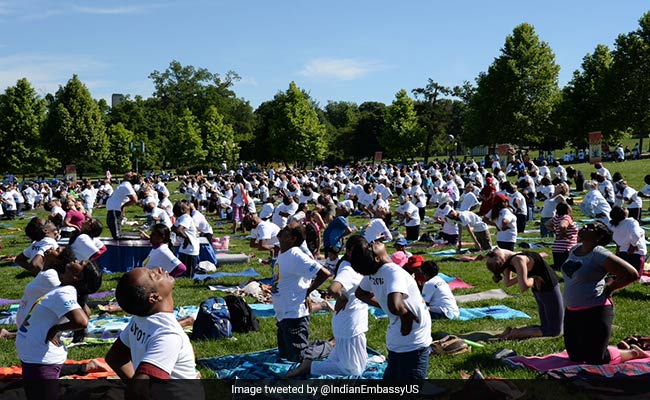 In Washington, hundreds of yoga enthusiasts gathered at the iconic US Capitol.

"It recognised it through a resolution which had a record co-sponsorship of 177 countries. This is an endorsement like no other, that the world has accepted as the Prime Minister called it one of the ancient gifts of Indian sages to humanity," Mr Sarna said.

Welcoming the participants, Mr Sarna noted that Yoga is widely embraced by the American people as a survey conducted in 2016 showed that there were 36.7 million Yoga practitioners in the US.

In his special message on the occasion, Senator Tim Kaine said that while the idea of International Yoga day is new, the art is built upon ancient Indian principles born of a desire to maintain inner well-being.

Congressman Gerald E Connolly said that this celebration is a "testament to the transformative nature of yoga" and the Indian-American community's indelible mark on the cultural fabric of the United States.
Comments
International Yoga DayYoga Day Celebrations