Sumit Sehdev, a chef, and Lakhvir Singh, a mechanic, both in their 30s, have reportedly been in the UK for 10 years. 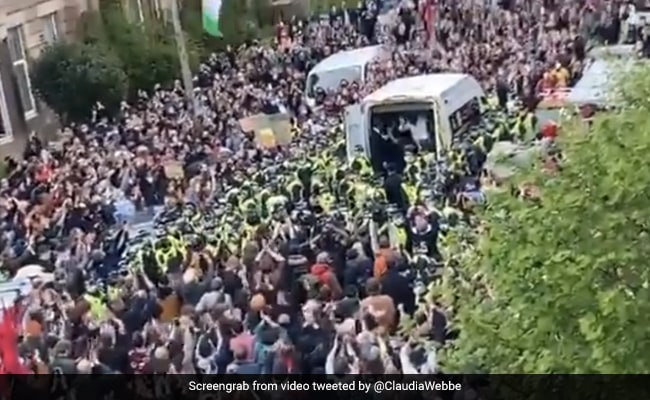 The two were released after eight-hour protest by their neighbours in the Scottish city of Glasgow.

Two Indian men being held in a detention van on "suspected immigration offences" walked free with the help of a human rights lawyer after an eight-hour protest by their neighbours in the Scottish city of Glasgow.

Sumit Sehdev, a chef, and Lakhvir Singh, a mechanic, both in their 30s, have reportedly been in the UK for 10 years.

Six UK Immigration Enforcement officers, backed by Police Scotland, removed them from their home in the Pollokshields area of Glasgow on Thursday and put them into a van heading to a detention centre, but were soon surrounded by a large crowd of protesters determined to free them.

"This was a cynical and provocative action by the Home Office to do it on the day of Eid. To be honest, they don't give a damn about the lives of these people, but the people of Glasgow do," Aamer Anwar, a Pakistani-origin human rights lawyer, told 'ITV News''.

"This city is built on the backs of refugees, people who've given their blood, sweat and tears to build this city. We stand firmly with these men," he said.

This is the moment that People Power forced the release of Sumit Sehdev and Lakhvir Singh.

They were detained following a Home Office Immigration raid during Eid - with the power of solidarity and humanity the people of Glasgow mobilised and said NO pic.twitter.com/bDCKI0UwdF

Lakhvir Singh spoke in Punjabi about how he feared for what would happen when the officers took them into custody in the van and tearfully thanked the people of his neighbourhood for turning out to support them.

The duo then walked down the street with Anwar towards the local mosque, with the estimated hundreds gathered cheering and clapping, waving placards that read "refugees are welcome".

"The Home Office needs to ask itself hard questions after today. Doing this on Eid, in the heart of our Muslim community, and in the midst of a serious Covid outbreak was staggeringly irresponsible - but the even deeper problem is an appalling asylum and immigration policy," said Scotland First Minister Nicola Sturgeon on Twitter, who had appealed directly with the UK Home Office to stand down.

A Home Office statement said the operation was "conducted in relation to suspected immigration offences".

Eventually, Police Scotland said it had to make an operational decision to protect the "safety, public health and well-being" and the two men were released on bail and returned home to their families.