Zayed Medal, UAE's top civilian honour, has been awarded to PM Modi for giving a boost to relations with the nation, the Crown Prince of Abu Dhabi, Mohamed bin Zayed Al Nahyan, said in a tweet. 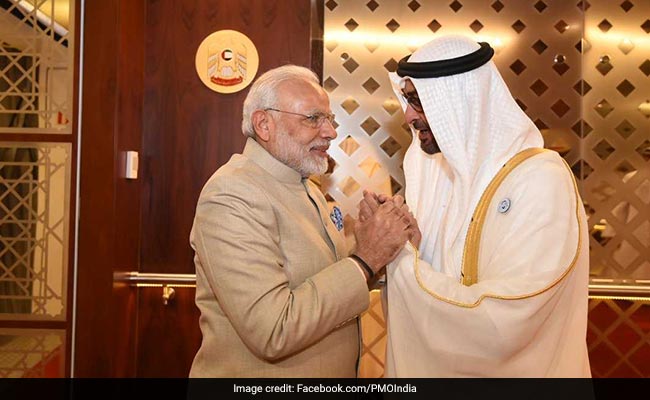 In a tweet, the Crown Prince of Abu Dhabi, Mohamed bin Zayed Al Nahyan, said, "We have historical and comprehensive strategic ties with India, reinforced by the pivotal role of my dear friend, Prime Minister Narendra Modi, who gave these relations a big boost."

We have historical and comprehensive strategic ties with India, reinforced by the pivotal role of my dear friend, Prime Minister Narendra Modi, who gave these relations a big boost. In appreciation of his efforts, the UAE President grants him the Zayed Medal.

PM Modi tweeted to say he accepts the award with "utmost humility".

I accept this honour with utmost humility.

Under your visionary leadership, our strategic ties have reached new heights. This friendship is contributing to the peace and prosperity of our people and planet. https://t.co/gtAy00uffw

"The State visit of the Prime Minister (Modi) to UAE in February last year helped in sustaining the momentum generated by earlier visits of Crown Prince in 2017 and 2016 and that of PM in 2015," the Ministry of External Affairs said.

"This singular honour is in recognition of the efforts of the government under the Prime Minister's leadership to develop the strategic partnership between India and the UAE," Mr Kumar said.

India and UAE share warm relations that were strengthened after PM Modi paid a visit to the nation in 2015. PM Modi visited the UAE for the second time as Prime Minister in February last year and held wide-ranging talks with the Crown Prince.

The Crown Prince had also visited India in 2017 as the chief guest for Republic Day celebrations in New Delhi.

In February, the Crown Prince telephoned PM Modi and his Pakistani counterpart Imran Khan as part of his efforts to de-escalate India-Pak tensions following the Pulwama terror attack claimed by the Pakistan-based Jaish-e-Mohammed terror group in which 40 CRPF personnel were killed.

"I am extremely happy to welcome the announcement of Order of Zayed for a great son of India Prime Minister Narendra Modi by His Highness Mohamed Bin Zayed," Foreign Minister Sushma Swaraj tweeted.

She said the prestigious award was given to PM Modi in recognition of his "stellar role" in ushering in a new era of strategic partnership with the UAE and the "best ever" relations with the Islamic world.

I am extremely happy to welcome the announcement of Order of Zayed for a great son of India Prime Minister @narendramodi by His Highness @MohamedBinZayed.

This is in recognition of Prime Minister's stellar role in ushering in a new era of strategic partnership with UAE and the best ever relations with the Islamic world. /2

A huge moment of pride for Indian citizens as Prime Minister @narendramodi has been conferred with the prestigious #ZayedMedal by the President of UAE.

Under the visionary leadership of PM, unprecedented efforts have been made to establish strategic ties with the Gulf countries.— Chowkidar Shivraj Singh Chouhan (@ChouhanShivraj) April 4, 2019

The award recognises the stellar role played by PM in forging deeper ties with UAE and the larger Islamic world.

On behalf of the people of UP, I Congratulate our Hon. PM Shri @narendramodi Ji on being conferred with Zayed Medal, highest civilian honor by UAE government for his international leadership & joint strategic cooperation between the two countries.

We Indians are proud of our PM.

The UAE accounts for 8 per cent of India's oil imports and is the fifth largest supplier of crude oil to India. The country is also a part of the International Solar Alliance (ISA), which is headquartered in Gurgaon in India.