Thirty-five protesters were detained by Delhi Police on while they tried to march towards the UP Bhawan from the nearby Assam Bhawan in south Delhi. 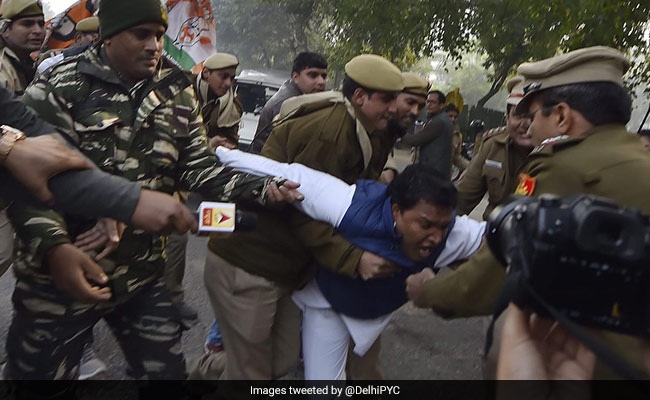 The UP government has sent many people to jails: IYC personnel

The youth wing of the Congress on Sunday staged a demonstration near the Uttar Pradesh Bhawan here against police "manhandling" party general secretary Priyanka Gandhi Vadra in Lucknow and demanded resignation of Chief Minister Yogi Adityanath.

Thirty-five protesters, including two women, were detained by Delhi Police personnel as soon as they tried to march towards the UP Bhawan from the nearby Assam Bhawan in south Delhi's Chanakyapuri area.

"The UP government has sent many people to jails and now the state police is manhandling senior political leaders. It has lost all moral and social right to remain in power," IYC media in-charge Amrish Ranjan Pandey alleged.

The alleged incident occurred in Lucknow on Saturday when the Congress leader was heading to the residence of retired IPS officer SR Darapuri, who was arrested in connection with the recent anti-citizenship law protests.

Priyanka Gandhi claimed that the police tried to stop her, she was surrounded, held by the throat by a woman cop and pushed by another as she was walking towards Darapuri's residence in Indiranagar's sector 18.

UP Police has termed the allegations "false".