"Your Actively Campaigning For Trump...": Congress Leader Hits Out At PM

Prime Minister Modi, in the US for a week-long tour that will include an eagerly-awaited address at the United Nations General Assembly, was joined by President Trump at a public event in Houston on Sunday 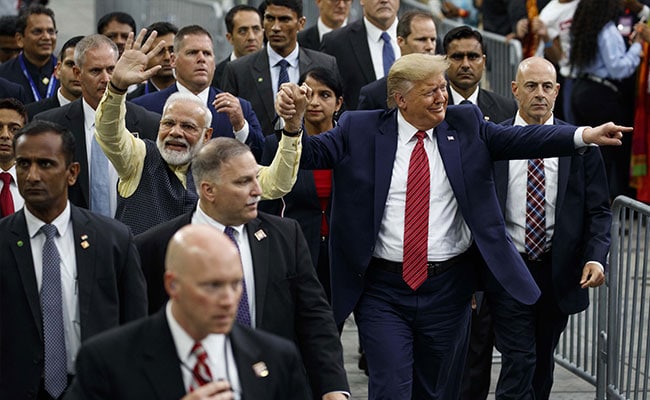 Senior Congress leader Anand Sharma has launched a stinging attack on Prime Minister Narendra Modi over the lavish 'Howdy, Modi!' event in the United States on Sunday, reminding him that he is in the country as the Prime Minister of India and not to campaign for US President Donald Trump. In tweets posted late Sunday night, the Rajya Sabha MP criticised PM Modi for having "violated the time-honoured principle of not interfering" in another country's election.

Prime Minister Modi, in the US for a week-long visit, was joined by President Trump at a public event in Houston, Texas. PM Modi, who received a rockstar welcome, took the unusual step of introducing Mr Trump to a crowd of more than 50,000.

In his introduction, PM Modi lavished praise on Mr Trump, whom he called "a very special person". President Trump, a Republican, is seeking re-election next year.

Mr Sharma, who pointed out that India's relationship with United States had always been bipartisan, was left less than impressed at what appeared to PM Modi's attempt to drum up support among Indian-Americans for Mr Trump.

"Mr Prime Minister, you have violated the time-honoured principle of Indian foreign policy of not interfering in the domestic elections of another country. Our relationship with the United States of America has throughout been bipartisan, vis-a-vis Republicans and Democrats," Mr Sharma wrote, adding, "Your actively campaigning for Trump is a breach of both India and America as sovereign nations and democracies".

Reminding you that you are in the USA as our Prime Minister and not a star campaigner in US elections.

"From CEO to Commander-in-Chief, from boardrooms to the oval office, from studios to the global stage, from politics to the economy and to security, he has left a deep and lasting impact everywhere," PM Modi had said when introducing Mr Trump.

"... We have met a few times and every time he has been the warm, friendly, accessibly, energetic and full of wit. I admire him for... his sense of leadership, a passion for America, a concern for every American, a belief in American future and a strong resolve to make America great again," the Prime Minister had declared, slipping in a reference to Mr Trump's election slogan.

PM Modi's BJP has hit back through Amit Malviya, the party's in-charge of national Information & Technology, who dismissed Mr Sharma's comment as "preposterous".

"I can understand some in the Congress are peeved at the massive success of #HowdyModi but to allege that PM interfered in US elections is preposterous!" Mr Malviya said, adding, "He referred to the 'Aabki Baar Trump Sarkar' slogan and it's resonance with the Indian American community back in 2016!"

I can understand some in the Congress are peeved at the massive success of #HowdyModi but to allege that PM interfered in US elections is preposterous! He referred to the ‘Aabki Baar Trump Sarkar' slogan and it's resonance with the Indian American community back in 2016! Listen. pic.twitter.com/BKtK4FlAtg

According to the Washington Post, there was good reason for President Trump to attend the 'Howdy, Modi!' event. "Democrats are making a big play for Texas in 2020... The rally... provides Trump with access to a potential pool of Indian American voters that could turn out to be critical in next year's presidential elections," it reported.

Whether Mr Trump's appearance alongside PM Modi will lead to votes from Indian-Americans next year remains to be seen. However, according to polling conducted the Asian American Legal Defense and Education Fund, in the 2016 presidential election more than 80 percent of Indian-Americans voted for Hillary Clinton, the Democratic nominee.