"You Want To Get Into Our Heads, Homes": Trinamool's Mahua Moitra To BJP

Mahua Moitra said,"You (the BJP) are not only content with our votes. You want to get inside our heads, inside our homes, you want to tell us what to eat, what to wear, who to love... You fear an India which is comfortable in his own skin... the citizens of the Republic need to fight now". 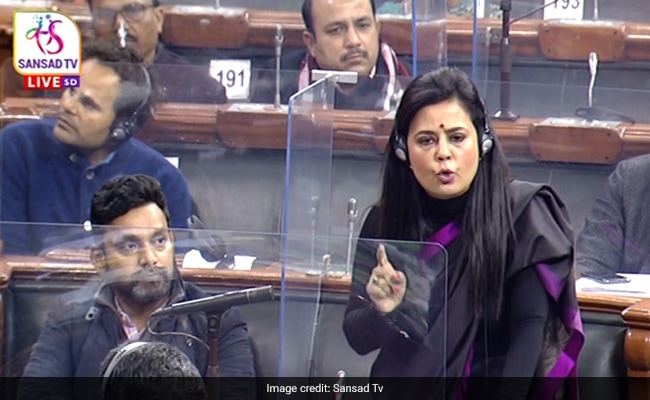 "You mistrust the Jats, the Sikhs -- anyone what can stand up to you," Mahua Moitra said.

Trinamool Congress's Mahua Moitra -- who had warned the BJP to be prepared for her speech in the Lok Sabha Thursday– issued a fiery condemnation of the party and its governments in the Centre and at the states, sweeping across a wide array of subjects till she was cut short by the Speaker with an admonition to talk with love". The barrage came a day after Congress's Rahul Gandhi ripped into the government, holding it answerable on multiple fronts from unemployment to foreign policy and accused it of putting the nation at risk from "outside and inside".

The Trinamool MP came armed with a longer list. Raising issues from Pegasus to farmers to Dharm Sansads that focus on genocide to ban on non-vegetarian food in streets of Gujarat's municipal areas, she said, "You (the BJP) are not only content with our votes. You want to get inside our heads, inside our homes, you want to tell us what to eat, what to wear, who to love... You fear an India which is comfortable in his own skin... the citizens of the Republic need to fight now".

The BJP, she said, "fears the future" where on the eve of election, they may not be able to use government agencies to raid opposition leaders. "So you need to extend the tenure of the CBI (Central Bureau of Investigation), ED (Enforcement Directorate) chief, depending on how they do your bidding," she said.

"You fear a future in which bureaucrats in a state cannot be bullied by the Centre, so you amend IAS cadre rules," she added, citing two of the government's most controversial rules bitterly fought by the opposition.

Accusing the government of "mistrusting the very soul of our Republic", she said this was why it wants to link Aadhaar with voter ID cards, "creating enormous possibilities of disenfranchising genuine voters".

The farm laws, she added, were revoked because the government feared the loss of 70 seats in Uttar Pradesh, where state elections begin next week.

"You mistrust the Jats, the Sikhs -- anyone what can stand up to you and yet when the elections come around you put on your pagri (turban) and shamelessly talk of alliances," she added.

Her sharpest barbs were reserved for the Pegasus spyware scandal, which is currently pending in courts.

"The way the masters of our republic mistrust the present is most acutely illustrated by the Pegasus" issue she said, asserting that she will bring it up despite its being sub judice since the BJP, during its days in the opposition, "brought down an entire government on 2G when 2G was sub judice".

Earlier, Ms Moitra had tweeted a dare to what she called the "heckler team" to prepare for her speech.

"Am speaking this evening in Lok Sabha on President's Address. Just wanted to give early heads up to BJP to get heckler team ready and read up on imaginary points of order. Drink some gaumutra shots too," Ms Moitra tweeted.