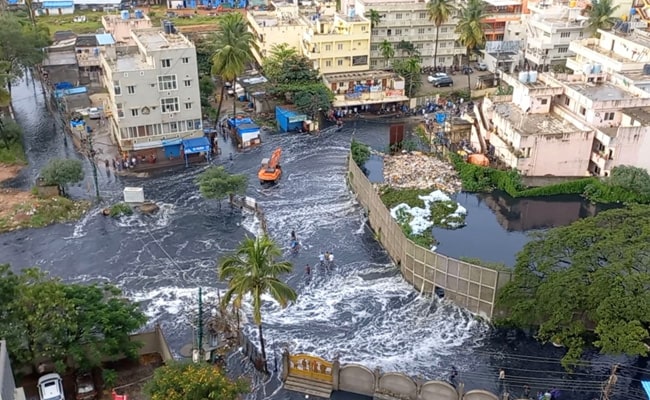 A tech park in east Bengaluru has admitted to encroaching on a storm water drain, but blamed it on Purvankara, the builder of the adjacent Purva Parkridge. The Bagmane World Technology Centre -- developed by the city's well-known developer Bagmane Group -- is one of the 15 big names who allegedly encroached on storm water drains, contributing to the massive floods that hit parts of the city last week. Besides, two villas in the adjacent uber-rich Puravankara Purvaridge area were also found guilty by the civic body, which conducted a second survey on the spot on Wednesday.

The Bagmane World Technology Centre, located along the IT corridor in east Bengaluru -- an area hit badly by the floods -- was found to have encroached by around 2.4 meters on the storm water drain.

"Yes, we have covered the storm water drain with slabs," said general manager GP Chakravarthi of Bagmane, whose tech park include industry behemoths like Boeing, Accenture, EY, DELL and Ericsson.

"We did that only to stop the back flow of water from Mahadevapura lake. Had we not done that, Bagmane would be flooded. The main culprit here is the Puravankara Purvaridge Villas. They have covered the storm water drain," he added.

The Puravankara Purva Park Ridge has 149 villas, each having three or four bedrooms. Of these, two villas -- located just across the tech park's boundary wall -- were found to have encroached on the drains by around 2.5 meters.

The civic body BBMP (Bruhat Bengaluru Mahanagara Palike) had carried out a survey last month and discovered the encroachment. The residents, however, went to court, contending that the survey was carried out in their absence and refuted charges of encroachment.

On Wednesday, the civic body officials arrived at the villa for a second time and surveyed the place in the presence of the residents. They found the Purvankara builder had built the villas illegally on top of the storm water drain.

Executive Engineer Malathi R said, "Depending on the court's decision, the next course of action will be taken".

The shocked residents said they will take their chance in court.

High-profile builders, developers and tech parks are on the list of alleged encroachers who closed around 700 storm water drains in Bengaluru – an action that led to last week's flood in parts of the city.

NDTV, which has accessed the list, found that the names include Wipro, Prestige, Eco Space, Columbia Asia Hospital and Divyashree Villas, besides the Bagmane Tech Park.