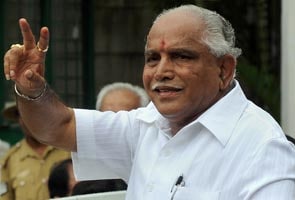 Bangalore: Former Chief Minister BS Yeddyurappa will go directly from Bangalore's Central Prison to a temple. He will be released this evening 25 days after he was arrested for corruption.

Two of those days were spent in two different hospitals at Mr Yeddyurappa's insistence. He returned to prison after doctors declared he did not need medical supervision.

His first stop - the Someshwara temple in Ulsoor - is not surprising. The BJP leader is in the habit of visiting temples to mark important events in his career.

His term as chief minister was littered with investigations, allegations and rumours of brazen and relentless graft. But it was only in July, when he was indicted in a report on illegal mining, that the BJP over-ruled his objections and ordered him to quit as the head of its first government in the South.

As part of an unofficial severance package, a furious Mr Yeddyurappa was given the prerogative of choosing who would replace him. He opted for Sadananda Gowda, known for his broad, infectious smile and the fact that he has never challenged Mr Yeddyurappa in a party infected with dissent.

Promoted
Listen to the latest songs, only on JioSaavn.com
Before he was arrested, bureaucrats sent him files on important matters before the new Chief Minister received them. Senior ministers visited him at his home, and then in prison. And many chose to skip a rally for BJP veteran LK Advani in Karnataka. Mr Yeddyurappra's supporters were outraged that Mr Advani had taken a strong stand against the former chief minister. On a tour to promote clean governance, Mr Advani stated that the BJP had to deal with corruption among its own if it wanted to convince the people that it has the right to take on the Congress over corruption.

Mr Advani later said he had no regrets about how the party handled its Karnataka crisis. "We never take any party weakness lightly and we proved the same in Karnataka. We had cautioned them in advance but when the Lokayukta report came out, he had to resign immediately. We are fully aware of the fact that no party can effectively win the confidence of the people against the present corruption of the Congress party if its own house is bedevilled with similar weaknesses."