"I can predict that tomorrow's vote of confidence in Karnataka will be won by BJP by foul means. Just wait and watch," Yashwant Sinha said. 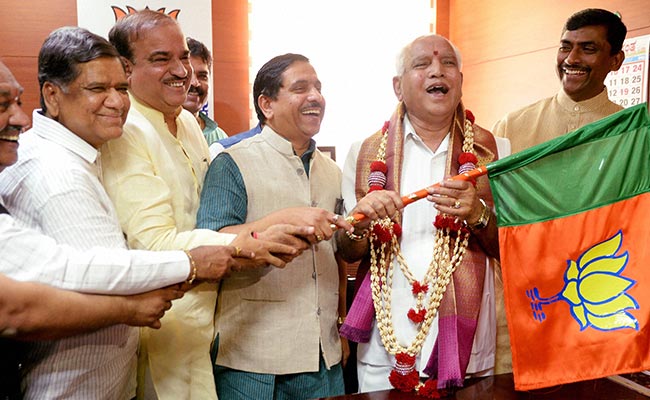 BS Yeddyurappa has to face a floor test at 4 pm on Saturday. (File)

Bengaluru: Yashwant Sinha, a former union minister, has been critical of the central government and his former party's leadership for its attempt to form the government in Karnataka when the BJP did not have the numbers or an alliance to reach the majority mark.

Mr Sinha had headed to a spot near parliament this week to protest Governor Vajubhai Vala's controversial invite to the BJP's BS Yeddyurappa that he said, had triggered an Indian Political League, quite like the Indian Premier League, or IPL in cricket,

"Now, MLAs and MPs will be auctioned. They will support those who will give them maximum money," Mr Sinha said on Thursday, a reference to the governor giving Mr Yeddyurappa 15 days to prove his majority.

"I can predict that tomorrow's vote of confidence in Karnataka will be won by BJP by foul means. Just wait and watch," Yashwant Sinha, who formally quit the BJP on the birthday of his son Jayant Sinha, a minister in PM Modi's government, said.

The jibe came less than 24 hours before Mr Yeddyurappa, sworn in as Chief Minister on the strength of his claim that the people of Karnataka had delivered the mandate to the BJP. The BJP has 104 seats in the state assembly that has an effective strength of 221 members. The Congress and Janata Dal Secular alliance won 78 and 37 seats respectively.

Mr Sinha's tweet was a follow-up to his forecast a day earlier that the political developments in Karnataka was, in his words, "a rehearsal" of what would happen in the national capital after the 2019 general elections if the BJP-led coalition didn't get a clear majority.

Promoted
Listen to the latest songs, only on JioSaavn.com
Mr Sinha was one of the veteran leaders of the BJP to be marginalised along with senior leaders including Murli Manohar Joshi and LK Advani after PM Narendra Modi's stunning victory in 2014. It was seen as a punishment for opposing Mr Modi being named their party's presumptive prime minister.

Unlike Mr Advani and Mr Joshi who have kept a low profile, Mr Sinha has been ruthless in his takedown of the central government. Last year, he had skewered his government's economic performance and has since then kept the barbs coming
Comments
BS YeddyurappaConfidence VoteYashwant Sinha