NEW DELHI: Whether BJP lawmaker KG Bopaiah is qualified to be the temporary speaker when Chief Minister BS Yeddyurappa takes a trust vote in the Karnataka assembly will be heard by the Supreme Court this morning. The three-judge bench, which had taken up the earlier petition against Mr Yeddyurappa's appointment, will start the hearing at 10.30 a.m, just half-an-hour before the assembly meets in Bengaluru. The trust vote is to happen later in the day, at 4 p.m.

The Congress had asked the top court on Friday evening to cancel Mr Bopaiah's appointment by Karnataka governor Vajubhai Vala because he had a dubious and controversial record.

Congress leaders say Mr Bopaiah, as the assembly's speaker, appeared to have been selected for his proven track record in helping Mr Yeddyurappa survive the floor test in 2010.

Back then, Mr Bopaiah, 62, had then famously disqualified five independent and 11 BJP lawmakers who rebelled against Mr Yeddyurappa after he was charged in a mining scam. That ruling helped the BJP government of Yeddyurappa survive the trust vote ordered by the government. 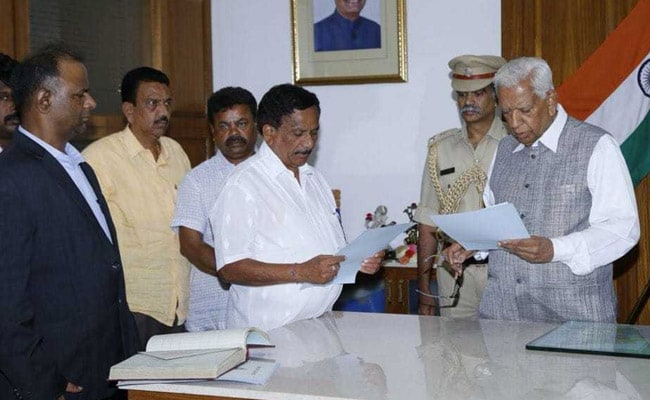 The decision was cancelled by the Supreme Court in 2011 which concluded that he hadn't been fair.

"Extraneous considerations are writ large on the face of the order of the Speaker and the same has to be set aside," the Supreme Court said in its 2011 verdict. The court had also passed strictures against the speaker for "ignoring constitutional norms" and acting in contravention of the basic principles that go hand-in-hand with the concept of a fair hearing".

Mr Bopaiah was also pro-tem speaker in 2008, when the Yeddyurappa government fell short of a majority and had to depend on five independents to scrape through the trust vote.

The Congress, which had stitched an alliance at the eleventh hour with the Janata Dal Secular to unsuccessfully stake claim to form the government, also asked the court that the assembly secretariat must be ordered to make a video recording of the proceedings.
Comments
Karnataka assemblySupreme Court (SC)no confidence motion