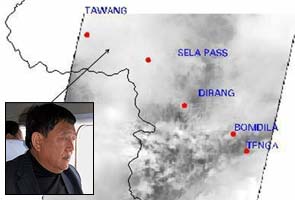 Itanagar: Wreckage of a helicopter found in Arunachal Pradesh is believed to be that of the one used by Arunachal Chief Minister Dorjee Khandu.  He has been missing along with four others since his helicopter took off from Tawang on Saturday at 9.55 am for Itanagar, the capital of the state.

"We have some information that is not encouraging...it is not good news" said Home Minister P Chidambaram.  He said three bodies have been sighted along with the debris of a helicopter "from a great height" by a search party near a place called Luguthang near the China border.

Promoted
Listen to the latest songs, only on JioSaavn.com
"The nearest Army post in Kyela...they have dispatched a team on foot," said Mr Chidambaram.

Massive ground search operations have been conducted over the last few days, with bad weather making it tough for Air Force searches to operate.  Satellite images from the Indian Space Research Organization (ISRO) have also been studied by experts involved in the search and rescue operations.