Worth Millions Dead, Another Rhino Becomes Target Of Poachers In Kaziranga 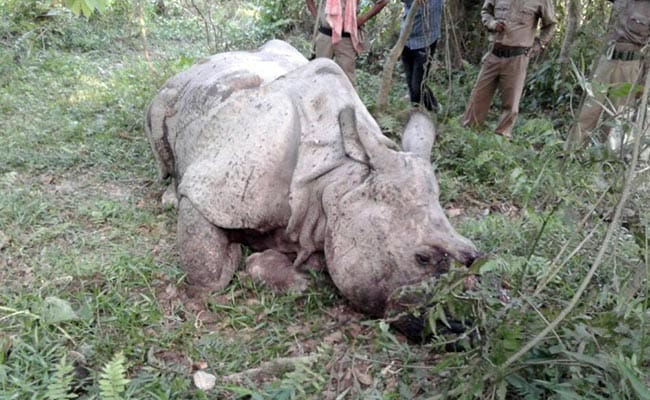 The rhino was alive a few hours after it was attacked. But biologist and rhino conservation expert Bibhav Talukdar said that the chances of survival were very bleak.

Kaziranga National Park, Assam: In the early hours on Sunday, a female rhino was shot by poachers at Assam's Kaziranga National Park, a UNESCO World Heritage site and home to the world's biggest population of the one horned rhino. Her horn, a prized commodity allegedly worth millions of dollars in the international grey market, was sawn off.

The rhino was alive a few hours after it was attacked. But biologist and rhino conservation expert Bibhav Talukdar said that it was not good news.

"Once the poachers shoot the rhino, it can even survive for many hours. Sawing off the horn just takes a minute or even lesser, that's why the poachers use this method. When this is done, the animal, already suffering from bullet injuries, loses a lot of blood from the forehead too, and the chances of it surviving the ordeal are very slim."

So far, six rhinos have been killed by poachers in this year, adding to the rampant poaching incidents at the park over the last few years.

It is not clear how many poachers were involved in this incident. The officer in-charge of the forest range at Kaziranga, Mr Subhasiah Das, said he and his staff would not comment.

But a veterinary surgeon who has conducted post mortems on rhinos killed by poachers for many years, said, "We have noticed that a lot of times, when the horn is sawed off, the skull is also fractured.  This means the rhino's final hours are spent in such excruciating pain that you and I can perhaps not even begin to comprehend."

In the last few years, the Assam government has spoken about equipping a decided force to protect Kaziranga's rhinos with latest weapons to tackle poachers. There have been talks of drone surveillance too.
Comments
rhinosRhino Count KazirangaKaziranga National ParkRhino Poaching