With a height of 37.5 feet and a diameter of 44.5 feet, Syed Wasim Shah, creator of the igloo, claimed it was the world's largest cafe of its kind. 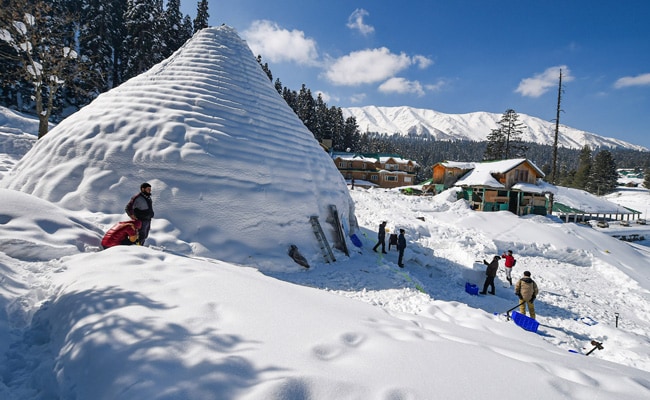 It took 64 days to complete it with 25 people working day and night, the owner said.

An igloo cafe, claimed to be the world's largest, has come up at the famous ski-resort of Gulmarg in Jammu and Kashmir, and has become a centre of attraction for tourists.

With a height of 37.5 feet and a diameter of 44.5 feet, Syed Wasim Shah, creator of the igloo, claimed it was the world's largest cafe of its kind.

"I saw this concept in Switzerland few years back where they have such hotels, which are equipped with sleeping facilities as well. I thought Gulmarg sees a lot of snow and why not start this concept here," Mr Shah said.

He said he had created an igloo cafe last year as well and claimed it was Asia's biggest.

He said the biggest igloo cafe, according to the Guinness Book of World Records, is in Switzerland, and its height is 33.8 feet and diameter 42.4 feet.

"So, this is larger than that," Mr Shah added.

He said last year's cafe had four tables, and 16 people could eat at a time, but this year, they have placed 10 tables.

"We have created it in two steps with a staircase. Forty people can eat at a time," he said.

"It has a thickness of five feet. We hope it stands till March 15, after which we will close it for public," he said.

The cafe has become a centre of attraction for local people as well as tourists thronging the resort.