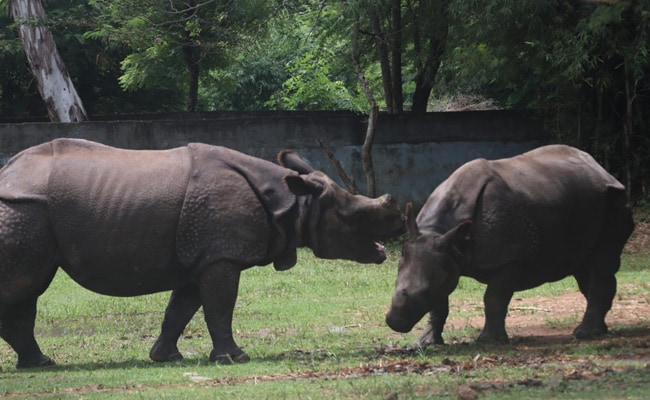 On World Rhino Day, Srija Santhanam was elated to get a chance to click selfies with her favourite greater one-horned Indian rhinos named Ram and Rhine at the Arignar Anna Zoological Park in Vandalur, Tamil Nadu. World Rhino Day is celebrated on September 22 every year.

It was a special day for her as her company, IT firm DCKAP which offers digital commerce products and services, adopted the two rhinos for Rs 3.6 lakh for six months.

"The company I work for had adopted these 6 and 4-year-old rhinos for six months... taking care of their food," Ms Santhanam, who works in the human resources department of the company and is a community advocate, said.

After the adoption of the two animals, Shiva Kumar, who heads strategy at the same company, said, "We want to do a lot more. It's a small beginning."

With the rhino as it's mascot, the 15-year-old company with operations in India and the US promotes and supports conservation of rhinos, Karthik Chidambaram, the firm's founder based in Texas, said.

"One of the most unique features of the Greater One-Horned Rhinos is that they disperse seeds from the vast grasslands they graze upon, helping the surrounding plants and animals to thrive and supporting the ecosystem. Here at DCKAP, we also strive to support the ecosystem and strongly believe in helping the community," the founder said. 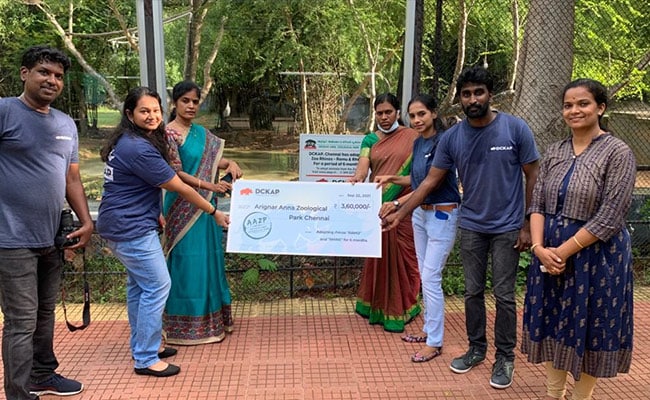 Employees of IT firm DCKAP after the company adopted two rhinos.

The coronavirus pandemic-induced lockdown had caused problems for the largest zoological park in India which is mainly dependent on tourism and visitors' fees. It has a total of 2,704 animals belonging to 172 species of mammals, reptiles and birds.

The Arignar Anna Zoological Park near Chennai is promoting adoption by individuals and corporates to make animal and wildlife conservation a public movement in an affordable way -- as low as Rs 100 a day. It has made the online adoption process easier and accessible on its website www.aazp.in

Director of the park Ms V Karunapriya said, "The awareness on adoption is increasing among public. Many are adopting their favourite animals for a day or two and are in a way turning conservationists."

Amid the pandemic, the park had lost a lion and a lioness due to suspected COVID-19. In a remarkable intervention, the team saved 13 other lions from the disease.

The footfall at the park has also started increasing gradually with around 7,000 visitors during weekends and around 2,000 on weekdays, officials said.