Punjab Chief Minister Amarinder Singh's reaction comes in the background of a statue of former prime minister Rajiv Gandhi being vandalised in Ludhiana by some persons on Tuesday. 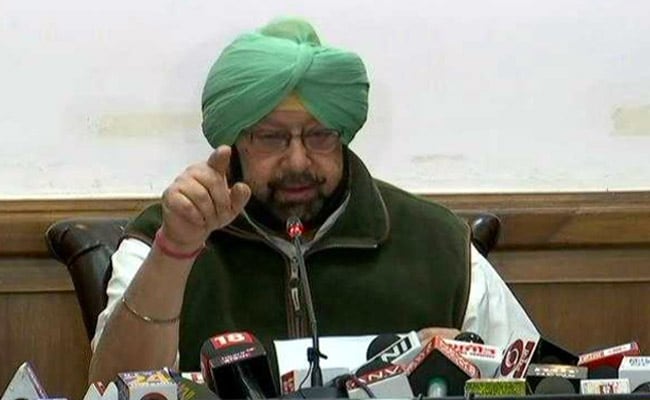 Punjab Chief Minister Amarinder Singh on Thursday said his government will not tolerate anybody trying to create a rift between communities and disturb the state's secular fabric.

His reaction comes in the background of a statue of former prime minister Rajiv Gandhi being vandalised in Ludhiana by some persons on Tuesday.

Mr Singh had claimed that the vandals owed allegiance to opposition Shiromani Akali Dal (SAD) and had asked its chief Sukhbir Singh Badal to apologise to the people of Punjab for the incident.

In an informal interaction with reporters on the second day of the three-day Shaheedi Jor Mel, he said Sikh religion propagated communal harmony, which nobody would be allowed to disturb.

Recalling the sacrifice of 10th Sikh Guru Gobind Singh, his youngest sons -- Sahibzada Zorawar Singh and Sahibzada Fateh Singh -- and his mother Mata Gujri, the chief minister said the peace for which they had laid their lives will be sustained at all costs.

He was responding to questions on the incident in Ludhiana.

Amarinder Singh accused the SAD for the Ludhiana incident and warned it to not to repeat such things, saying there were statues of several senior SAD leaders in various parts of Punjab.

The present Punjab government is committed and will protect statues of all leaders, he asserted.

The Congress leader alleged that the SAD was making "frustrated attempts" to spread communal hatred by fanning the flames of the 1984 anti-Sikh riots and dragging the name of the Gandhi family.

Rajiv Gandhi was not even there when the violence erupted, he said.

The chief minister claimed that Sukhbir Badal was studying in the US and former SAD minister Bikram Singh Majithia somewhere in Punjab during the time of the riots, but they were not in the know of things. Now, they are trying to exploit it in the name of religion to gain political mileage, Amarinder Singh alleged.

It is evident that the SAD was indulging in petty politics and trying to disrupt the harmony between communities, he said, adding that he would not allow anyone to indulge in such politics of hate.

In response to another query regarding Prime Minister Narendra Modi's proposed political rally at Gurdaspur on January 3, the chief minister said the PM is holding such rallies in the run-up to the Lok Sabha polls.

But, the state Congress leadership is geared-up to once again wipe out the SAD-BJP alliance from Punjab, he asserted.

On the overall development of historic city of Fatehgarh Sahib, the chief minister announced that a chowk (intersection) will be soon constructed in the memory of legendary Sikh warrior Baba Banda Singh Bahadur.

Amarinder Singh, who earlier paid obeisance at the historic Fatehgarh Sahib gurdwara and later partook the langar, expressed happiness that no political conference was taking place during the mela, which was not an occasion for such rallies.

The lakhs of people who have congregated for the Shaheedi Jor Mela have come here not to listen to political speeches but to pay their respects to Guru Gobind Singh's martyred sons, whose sacrifice can never be forgotten, the chief minister said.

Gurdwara Fatehgarh Sahib, located 5 km north of Sirhind where the Sahibzadas were killed on December 26, 1705, marks the site of their live entombment and is a revered Sikh religious site.

The Shaheedi Jor Mel, being held here since time immemorial, is a mark of respect to remember the supreme sacrifice of the sons and mother of the 10th Sikh Guru.