Won't Let India Down Even In Adverse Circumstances: Rajnath Singh

Union Home Minister Rajnath Singh said, "India is no longer a weak nation. It has become a strong nation and its image before the world has changed." 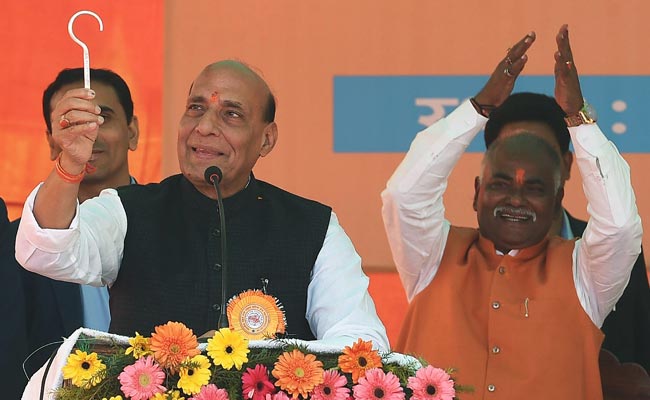 Mr Singh said that India had given a bold message that any insult to the country will not be tolerated.

Barabanki, Uttar Pradesh: Amid fresh shelling by Pakistan at Indian positions along the International Border and the LoC, Union Home Minister Rajnath Singh said today that the government would not let the country down even in adverse circumstances.

"Under no circumstances, however adverse they may be, we will never let India down," he said.

Mr Singh, on the last day of his three-day visit to Uttar Pradesh, was speaking at a public meeting here, but did not name Pakistan.

The home minister said, "India is no longer a weak nation. It has become a strong nation and its image before the world has changed."

In a blunt message to the neighbouring country, Mr Singh had yesterday said in Lucknow that India had shown it could attack its enemies not only on its soil, but also in their foreign territory, if need be.

His remarks came almost a month after a group of five Army commandos crossed the Line of Control (LoC) in Poonch sector of Jammu and Kashmir and killed three Pakistani soldiers and smashed a post, in a swift and daring operation to avenge the killing of four Indian Army personnel by a Border Action Team of the Pakistan Army in Keri sector in Rajouri district.

"India's image in the world has become that of a strong nation and we have given a strong message to the world that we can attack our enemies not only on our soil, but also in their territory. India has developed this power," he had said.

In the same refrain, he said today that India had given a bold message to the world community that any insult to the country would not be tolerated.

In the latest ceasefire violation, Pakistani troops opened fire and lobbed mortars at Indian positions along the International Border and the LoC in three sectors of Jammu and Rajouri districts overnight, raising the death toll in the ceasefire violations since Thursday last to 12.

Promoted
Listen to the latest songs, only on JioSaavn.com
Over 60 people were injured in the ceasefire violations.

Mr Singh, who represents the Lucknow constituency in the Lok Sabha, today inspected work on under-construction Outer Ring Road which will link the state capital with Barabanki.
Comments
Rajnath SinghPakistan-India