Highlighting the need for appropriate women representation at various decision making levels, the delegation requested the Lt Governor to intervene in providing 33 percent reservation for women. 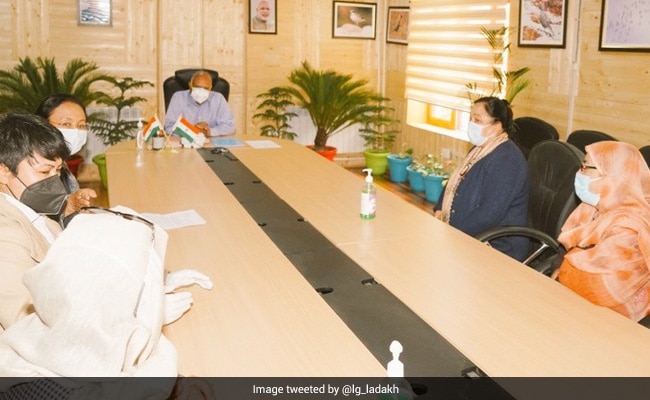 The delegation comprising representatives from women wing of the Ladakh Buddhist Association, Anjuman Imamia, Anjuman Moin-ul-Islam and Christian Association, also apprised Mr Mathur of the hurdles faced by aspiring women contractors in acquiring a contractor-card owing to the criteria which demands a property ownership certificate and sought exemption, the spokesperson said.

Highlighting the need for appropriate women representation at various decision making levels, the delegation requested the Lt Governor to intervene in providing 33 percent reservation for women in the councils hill of Leh and Kargil and also inclusion in various district and UT level committees and organizations.

They suggested that to encourage women entrepreneurs to become financially independent, the procedure for approval of bank loans can be simplified and also requested for considering reduction of interest rates on such loans, the spokesperson said.

In order to support destitute women, the delegation requested Mr Mathur to consider reserving a certain percentage of small public business spaces for them.

They also apprised the Lt Governor regarding the need of a women's hostel or home for victims of domestic violence, stating that this step may encourage such women to come forward and share their plight, the spokesperson said.

Other suggestions included setting up of an adoption-cum-child cradle centre and a de-addiction and rehabilitation centre.

Requests for approval of the Ladakh Buddhist Succession Amendment Act and Education of women as per Right to Education Act of 2009 were also made.

The spokesperson said the Lt Governor appreciated the delegation for their extensive and comprehensive proposal on the subject of women empowerment and for addressing sensitive issues faced by women and assured them of appropriate step.