Karti Chidambaram, the son of former union minister P Chidambaram, was arrested from the Chennai airport on February 28 on charges that he had facilitated, for a bribe, investment approvals for the INX media group in 2007 and 2008. 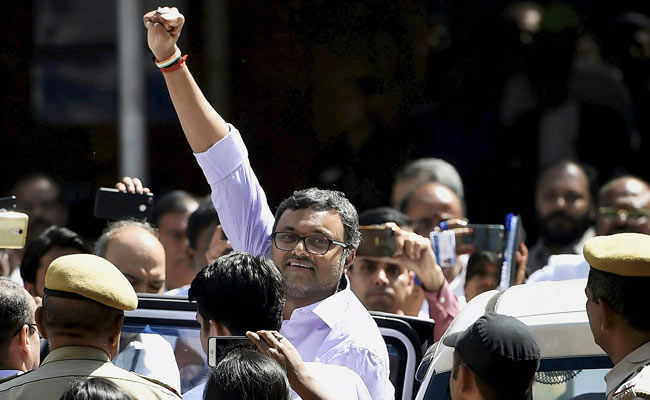 New Delhi: If anyone wants to lose weight, there is no need for gym or diet. Just stay in CBI custody and eat CBI canteen food: That's the advise of Karti Chidambaram, the son of former Union Minister  P Chidambaram, who spent the last 12 days in custody of the Central Bureau of Investigation after being arrested in connection with a corruption case. The 48-year-old businessman was sent to Delhi's Tihar jail today till March 24.

"I have lost my appetite and am eating very less, due to which I have lost lot of weight and it is good also," Karti Chidambaram told NDTV while waiting for the order of a special court. "I need a new set of clothes as all my old clothes have become lose. So if anyone wants to lose weight they should dial CBI," he added laughing.

The Congress leader, who is hooked to his cellphone also had to undergo a digital detox. In CBI custody, he was neither allowed a phone or even a watch. "It was good experience. I used to ask officials what time it was," he told his lawyers.

Karti Chidambaram, however, said he had "no complaints" against the CBI officials. "They dealt with me in a most professional manner," he said.

Citing security concerns, Karti Chidambaram today asked the court for a separate cell and bathroom, citing the status of his father as a former union minister who handled terror cases. "Some of the accused related to those cases are lodged in Tihar, so I apprehend a great threat to my security... something may happen to me," he said, citing the death of biscuit baron Rajan Pillai in 1995 in Tihar.

Special CBI judge Sunil Rana turned down the request, but asked the jail officials to ensure his security.

CBI sources said they have followed all procedures as long as son of former union finance minister was in their custody. "We follow rules. When the court asked us to if we could allow him home cooked food, we did oblige," a senior official said.

Promoted
Listen to the latest songs, only on JioSaavn.com
Mr P Chidambaram was present in the court room for the hearing in the INX media case, in which his son has been accused of taking kickbacks. The investigators say he was paid more than Rs. 3 crore by Peter and Indrani Mukerjea, the former owners of the media house, for getting government clearance for foreign investments to the tune of Rs 300 crore in 2007 and 2008, using his father's influence. The Mukerjeas are currently in jail on charges of murdering Indrani's daughter Sheena Bora.

Karti Chidambaram was arrested from the Chennai airport on February 28.