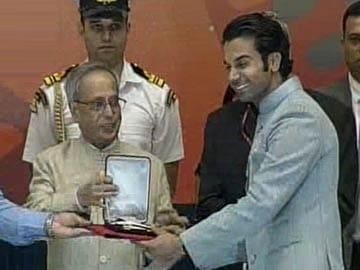 'Ship of Theseus', a complex and philosophical film about an unusual photographer, a Jain monk and a stock broker, was given the best picture award which carries a Swarna Kamal and a cash prize of Rs 2,50,000.

Hansal Mehta and Rajkumar Rao were given the award for the best director (Swarna Kamal and Rs 250,000) and best actor (Rajat Kamal and Rs 50,000) for their biopic "Shahid" (Hindi) on slain lawyer-activist Shahid Azmi.

"I just tried to tell the story in the best way possible and when your attempts are recognised like this, it feels like a vindication. 'Shahid' was a challenging film and it was made at a time when the country is going through a deep polaristaion and at such times telling stories which address these issues directly is always a challenge," Mehta told PTI.

Rao, who played the slain activist, said "I met Shahid's family and they organised a small party for my win. They were equally happy like the way I am."

Rao shared the best actor trophy with Suraj Venjaramoodu for Malayalam film 'Perariyathavar' which also won the award for being the best film on environment conservation.

"I am delighted to win the first national award of my career. National award has its own dignity and place. Unlike other awards, this one is not a commercial award. I didn't even know that my name was sent for it. It came to me as a soothing surprise," Shukla told PTI.

Promoted
Listen to the latest songs, only on JioSaavn.com
'Bhaag Milkha Bhaag', a biopic on athlete Milkha Singh, won the award for the most popular film. The producer and director of the film received a Swarna Kamal and Rs 2,00,000 each. 'Milkha' also won the best choreography award for Ganesh Acharya.