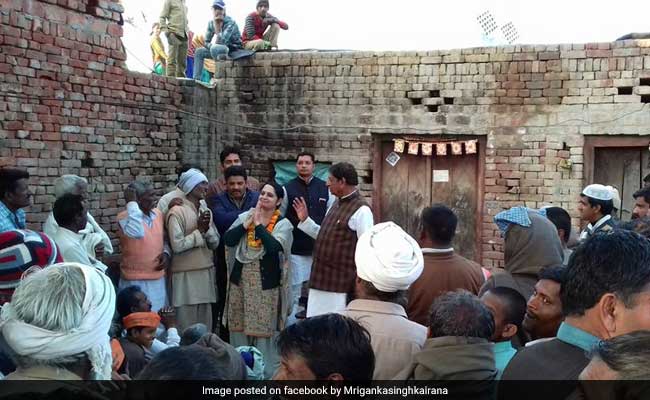 As voting begins for the Uttar Pradesh election today, a debutante who has drawn attention is Mriganka Singh, the daughter of Hukum Singh - the BJP parliamentarian known for his controversial claims of an exodus from a Muslim-dominated town.

Mriganka Singh, 58, says she is no political greenhorn; she has been working with her father, a seven-time BJP lawmaker, for years.

"By just being his daughter, why should I be denied an opportunity?" she told NDTV last month, at her father's home in Kairana. She insists that the BJP also factored in winnability while deciding to pick her.

An educationist, Ms Singh lives in Ghaziabad, where she runs a chain of schools. She has been known to say this - "If a doctor's son can be a doctor, why can't a politician's daughter become a politician?"

In her first-ever election battle, one of her rivals is her own cousin, Anil Chauhan, who contested the 2014 by-elections on a BJP ticket in Kairana but lost narrowly.

Last year, Hukum Singh controversially released lists of what he claimed were Hindu families who had left Kairana because of local Muslim criminal gangs. Kairana has a 50 per cent Muslim population. The claims were not established. Mr Singh later said it was not a communal issue but one of law and order.

Her campaign was powered by her four sisters, based in the US, and 21-year-old son.