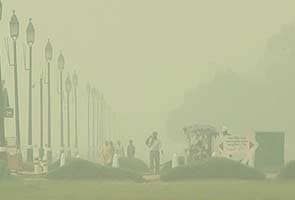 New Delhi: The dense smog that kept Delhi under its grip for five days has begun to lift up. Parts of the city were windy today after a dry phase, helping clear the dust and pollutants and improving visibility.

At the Delhi airport, the visibility this morning was between 700 metres and 900 metres, good enough for flights to take off and land.

Dr JK Jenamani, Director, Indian Meteorological Department, told NDTV there had been no let-up in the smog in the last few days because of the lack of winds.

"Smog is normal in November, but this time it has been denser and prolonged because of high pollution and no wind motion from the surface till 4,000 metres above sea level," Dr Jenamani said.

"This caused the pollution from vehicles and industries to remain in the air," he said. "Such thick smog was last seen in 2008."

The weather department said the smog was likely to clear out by November 7 when winds from Rajasthan start blowing.

The smog put the focus back on Delhi's air quality, which had improved after the switch of public transport from petrol and diesel to the cleaner CNG. But the advantage is thought to have been frittered away.

Promoted
Listen to the latest songs, only on JioSaavn.com
Last week's largescale burning of farmlands in Punjab and haryana too contributed to Delhi's pollution and the smog.