"Will Start Preparing To Contest For 2024 Elections": BJP's Pankaja Munde 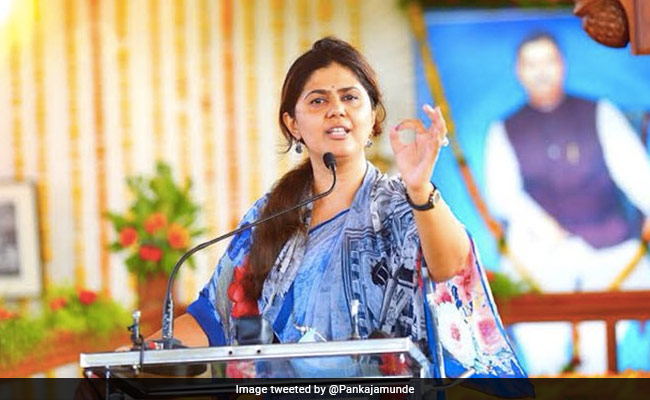 Pankaja Munde was a cabinet minister in the Devendra Fadnavis-led state government. (File)

BJP leader Pankaja Munde today said she was not disgruntled over not getting any post, and would start preparations for contesting the 2024 Maharashtra Assembly elections from Parli.

"Struggle is part of everyone's life. Even Chhatrapati Shivaji Maharaj had to struggle. Late Gopinath Munde had to struggle throughout his entire political career. He got into government for only four and a half years," she said.

Union Home Minister Amit Shah and BJP president J P Nadda had seen the crowds at her earlier Dussehra rallies and asked her to work for these people, she said.

"People think their leader should get something and there is nothing wrong with that. I am not holding any post since 2019 Assembly polls but I am not disgruntled," the former state minister said.

She, however, made it clear that she wanted to contest again from Parli, where her estranged cousin and NCP leader Dhananjay Munde had defeated her last time.

"But the party organization is above any person. I am not disgruntled with anyone. I shall start preparations for 2024 polls if the party gave me a ticket," she said.

She changed herself as much as she could, and now it was the turn of those who wanted her to change, she said.

Ms Munde was a cabinet minister in the Devendra Fadnavis-led government in the state between 2014 and 2019. But she did not make it to the cabinet when the BJP came to power again this June in alliance with the Eknath Shinde-led Shiv Sena faction.