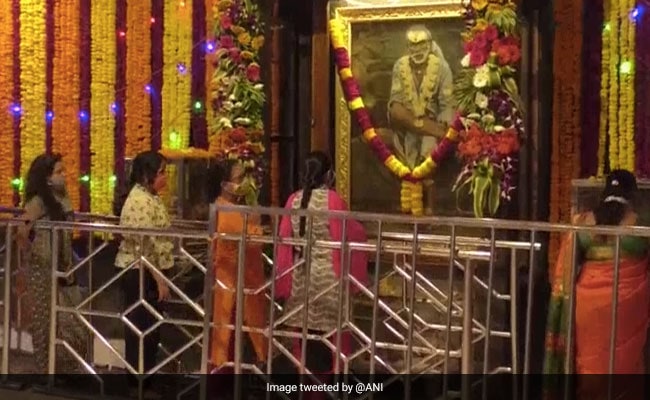 The Shirdi trust said that this was not a dress code but merely a request. (File)

After Shri Saibaba Sansthan Temple Trust in Shirdi put up a notice appealing to devotees to dress in "civilized clothes" as per "Indian culture", women rights activist Trupti Desai today called it an infringement of the constitutional right to freedom of expression.

She said if it was not removed, she and other activists would remove it at 1 pm on December 10.

The Shirdi trust, however, said that this was not a dress code but merely a request.

The temple notice says: "You are entering into holy shrine of Shri Saibaba, hence to observe the holy spirit, humble request to wear civilised costumes or as per Indian Culture."

"The sign that has been put up by the Shri Saibaba Sansthan Trust is wrong and is an attempt to take away the constitutional right to express oneself. We have sent a complaint to Chief Minister Uddhav Thackeray demanding that the institution be investigated," she said in a video message, adding that the devotees knew very well how to maintain the purity of a temple.

The Shri Saibaba Sansthan Trust's Chief Executive Officer Kanhuraj Bagatesaid some media have reported that a dress code has been issued for devotees. "This is incorrect. We had received complaints from a few people that some were dressing inappropriately. I appeal to the people to dress properly with a pure heart when coming to the temple for darshan, and it will be greatly appreciated if they wear Indian attire."

Sachin Tambe, a former trustee of the Shirdi temple, and Rural Development minister Hasan Mushrif also backed the temple's request, saying that that it was the collective responsibility of the devotees to maintain the sanctity of the temple.

"It is not a forceful order; it is an optional appeal. While we do believe that everyone has the right to live their life as per their choice, wearing a traditional dress to the temple is good. We have even received letters from people appreciating the move," Mr Mushrif said.