"Will Not Rest Till Farm Laws Go": Amarinder Singh At Mega Punjab Rally

The Congress, which governs Punjab, is holding tractor rallies from October 4 to October 6 across the state in protest against the centre's new farm laws 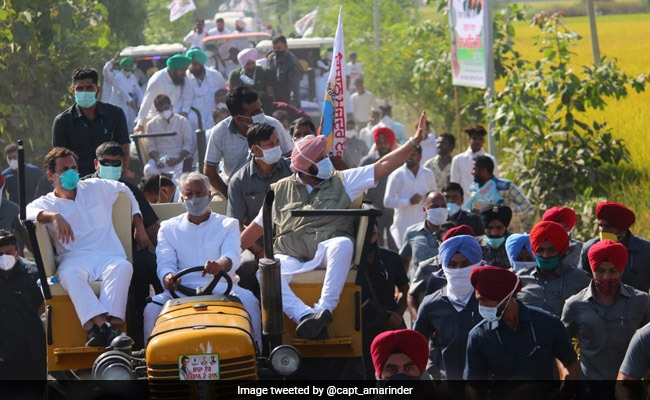 Captain Amarinder Singh, Rahul Gandhi and other leaders participated in the protest

Punjab Chief Minister Amarinder Singh on Sunday warned the central government that the protests against the controversial new agricultural laws will continue till they are repealed or changed to address concerns raised by farmers.

"The verbal assurances of the BJP-led government cannot be trusted. We will not back out of the fight against the black farm laws till they are amended to give a written Constitutional guarantee on MSP (Minimum Support Price) and continuation of the FCI (Food Corporation of India)," he said.

We will not rest until Central Govt either repeals Anti-Farmer Laws or they amend it to address Punjab's & our farmers legitimate concerns. Punjab will continue to fight for its constitutional rights & rights of its people, till such time that justice is done. #KhetiBachaoYatrapic.twitter.com/lpUvitjSOv

Vowing to scrap the new farm laws once the Congress returns to power at the centre, former party chief Rahul Gandhi and Captain Singh led a tractor rally in Punjab's Moga accusing the BJP-led government of acting at the instance of corporates to "destroy" farmers.

The Congress, which governs Punjab, is holding tractor rallies from October 4 to October 6 across the state in protest against the centre's new farm laws.

"It's a day of happiness because we are waging a war against the new laws. Farmers union are all up against it. We will go to every single village of Punjab," Captain Singh said.

"The farmers of Punjab had been responsible for giving India is food security and feeding the nation for six decades and their interests had to be protected at all costs. We are less than 2 percent area of national area and feed more than 50 percent of area. 65 percent of India depends on agriculture," he said.

The Congress veteran also attacked the opposition Shiromani Akali Dal which parted ways with the BJP over the farm bill amid immense backlash from its voter base.

"The Akalis and the BJP should not be trusted. Hardeep Puri, the union minister, has clarified that Harsimrat (Kaur Badal of Akali Dal) agreed to these ordinances," he said.

The three controversial agricultural bills were adopted late last month amid nationwide protests by farmers who say the laws will stunt their bargaining power and instead allow large retailers to have control over pricing.

Farmers' organisations say one of the three laws could lead to the government stopping buying grain at guaranteed prices or MSP, a move that would disrupt wholesale markets which have so far ensured fair and timely payments to farmers.

The government, however, has clarified that the wholesale markets will operate as usual, and it only aims to empower farmers to sell directly to buyers.