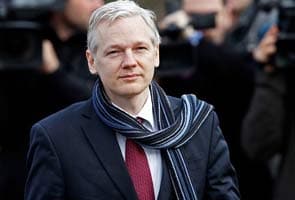 New Delhi: In comments that could fuel a fresh controversy over the black money issue, WikiLeaks founder Julian Assange today said there are Indian names in the Swiss bank data list that are going to be made public.

Indicating that there are bigwigs among the Indians having their accounts in Swiss banks, he said, "Similarly, in these private Swiss banking concerns, where you need at least a million dollar, which is a significant amount of money...not an average Indian..."

Asked whether the names will come at any point, he said on "that, you should absolutely not lose hope".

He, however, declined to reveal anything more on the issue at this stage.

Noting that he has come to know through a report that there are more Indian deposits in the Swiss banks than any other nationality, Assange said, "there is no reason why India should not be aggressive."

Praising the German government for its aggressive approach to unearth black money stashed offshore, he said that India "should be more aggressive because India seems like it is losing per capita much more tax than Germany."

Assange alleged that Indian government's response to the WikiLeaks cables was "one of the worst in the world" and a "clear attempt to mislead the nation on what the cables were".

He said that the response by the Indian government left a lot to be desired.

Assange also dismissed contention of the Indian government that accords on double taxation were coming in the way of tracking the trail of black money.

"Double taxation does not have anything to do with asset hiding. It doesn't simply cover asset hiding," he said.

Promoted
Listen to the latest songs, only on JioSaavn.com
Assange said that the issue of stashing black money in foreign banks was much worse than just local corruption as when money is pushed offshore, "...then every time they are selling rupees and the result is that the currency of the nation is debased...everything for all Indians become more expensive as a result of that transfer."

Assange had earlier claimed that he was handed over documents of bank accounts by a former banker Rudolf Elmer and the whistleblower also claimed that the names in the documents came from "US, Britain, Germany, Austria and Asia - from all over," and include "business people, politicians, people who have made their living in the arts and multinational conglomerates - from both sides of the Atlantic".