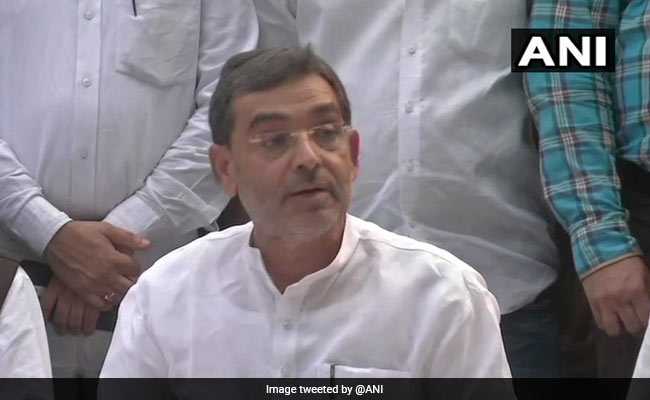 Upendra Kushwaha's RLSP had won all the three seats it had contested in Bihar in 2014.

Governments or political parties should not build temples, but undertake developmental projects like schools or hospitals, said Union minister Upendra Kushwaha, minutes after announcing that he has a meeting scheduled with Congress chief Rahul Gandhi next week.

But there was also a hasty amendment.  "I'm also in favour of temple construction. But do it in a legal manner. After all, the country runs by constitution and the Constitution has clearly defined secularism," he said at a meeting in Motihari, where he was expected to reveal whether his future plans include the BJP.

Mr Kushwaha's party -- which has two members in Parliament -- has support among Kushwaha community, which comprises six per cent of voters in Bihar.

Besides the Congress, the RLSP leader has been getting feelers from Lalu Yadav's Rashtriya Janata Dal and Hindustani Awam Morcha. He has also been in talks with former JD(U) leader Sharad Yadav, who has formed his own party. There is speculation that two small parties are considering a merger.

For months, the Union minister is known to be disgruntled over the BJP's seat sharing formula for next year's general elections, which has delivered Nitish Kumar's wishlist - as many seats as the BJP -- at the cost of other allies. Both Mr Kushwaha and Ram Vilas Paswan will have one less seat to contest. Leaders of the Janata Dal United have routinely speculated when Mr Kushwaha would be walking out of the NDA.