Why Jammu And Kashmir Nomads Are On A 500-km March

They call it the 'Tribal Bachao' march (Save Tribals march) as Bakerwal and Gujjar tribals fear that the government's move to include upper castes in the scheduled tribe category will deprive them of their rights. 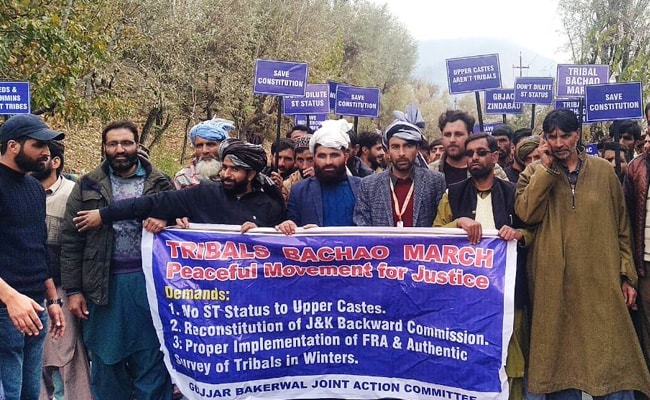 They are also fearful that the inclusion of new groups may dilute their distinct identity.

In Jammu and Kashmir, it's an unusual sight of nomads marching on roads without their herds. They are carrying placards and banners, shouting slogans for the protection of their identity and rights under the scheduled tribe status.

They call it the 'Tribal Bachao' march (Save Tribals march) as Gujjar-Bakerwal tribals fear that the government's move to include upper castes in the scheduled tribe category will deprive them of their rights in education and jobs.

They are also fearful that the inclusion of new groups may dilute their distinct identity.

At the onset of a harsh winter in Kashmir, nomads whose livelihood is rearing livestock have just completed their seasonal migration from the upper reaches of Kashmir Valley to the plains of Jammu. But many of them are back in the Valley despite heavy snowfall and cold conditions in the region.

Nomad activists have started a 500-km-long march from Kupwara to Kathua covering all 20 districts of Jammu and Kashmir. They are visiting tribal villages, apprising people about the inclusion of upper castes as scheduled tribes and how it is going to impact their future.

The Gujjar-Bakerwal community continues to remain behind in education and other social indicators compared to other communities including scheduled castes and OBCs.

Under the ST status, the Gujjar-Bakerwals are getting 10% reservation in education and government jobs besides nine reserved seats in the Jammu and Kashmir Assembly.

The government's move to include Pahari-speaking people and other upper caste groups like Gadda Brahmins in the ST category has made them feel insecure.

After recommendations by a commission to grant ST status to Pahari-speaking people, Kohlis and Gadda Brahmins, the Jammu and Kashmir administration has reclassified "Pahari-speaking people" as "Pahari ethnic group" to pave way for their inclusion in the ST category. The reclassification will avoid any legal hurdles since no reservation can be given on linguistic grounds.

The Gujjar-Bakerwal tribals say even if the government increases the ST quota from the current 10% after including upper castes in the reserved category, they just cannot compete with them and eventually will be left out of education and jobs. This also means nine Assembly seats reserved for Gujjars and Bakerwals will no longer remain as their exclusive domain.

"It's an assault on a community that is historically marginalised. It was because of reservation that some of us were able to get an education and jobs. Now it appears they are taking it away after including upper castes in ST category," said Guftar Ahmad, a Gujjar activist.

As per the 2011 census, there are more than 12 lakh Gujjar-Bakerwals living in Jammu and Kashmir. A large section of the two communities herd buffalos, goats, and sheep. They are often on the move from one grassland to another for grazing.

The government has opened mobile schools for nomad children. About 40,000 tribal students are enrolled in these seasonal schools even as critics say many such schools exist only on paper.

Tribals say that given their background, how can their children who are getting an education while grazing cattle can compete with upper caste people if they are included in the ST category?

Guftar Ahmad, who was part of a Gujjar-Bakerwal delegation, met with Union Home Minister Amit Shah during his recent visit to the state. Mr Ahmed said that the union minister assured the delegation that their rights will be protected. But at the same time, Mr Shah announced ST status for Paharis and other groups.

"How can they give scheduled tribe status to upper castes on the basis of their language?" asked Mr Ahmad as he led a march in Ganderbal district.

Ahead of possible assembly elections in Jammu and Kashmir, ST status to Paharis and other groups is seen as a major political move by the Bharatiya Janata Party to win maximum seats in the state. The region was stripped of statehood and special status in 2019 and remains without an elected government for more than four years.

"Who Will Take Care Of Girls": A Owaisi On Assam Child Marriage Crackdown