Jagdeep Dhankhar said he has taken an oath to preserve, protect and defend the Constitution and the law and devote himself to the service and well-being of the people of West Bengal. 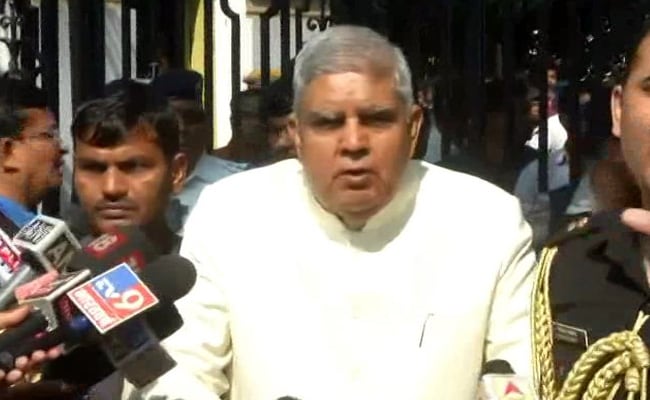 Jagdeep Dhankhar had taken a strong exception to being virtually called a "tourist".

Claiming that the media was "scared" to ask questions to West Bengal Chief Minister Mamata Banerjee, Governor Jagdeep Dhankhar on Thursday urged journalists to show courage, shed their fears and pose queries where they needed to.

Interacting with media persons outside the Assembly, the Governor took potshots apparently targeting Banerjee and other high government functionaries in the state.

When a reporter sought his reaction on criticism from the ruling Trinamool Congress that he was trying to grab headlines, Jagdeep Dhankhar said: "Should I not go to a university, should I not come to the Assembly? Should the Senate meeting at the Calcutta University be cancelled?"

Jagdeep Dhankhar said he has taken an oath to preserve, protect and defend the Constitution and the law and devote himself to the service and well-being of the people of West Bengal.

"Tell me how I violated it, rather than scripting it as they are saying. I know there is a difficulty for you to ask questions to them. Please pick up courage, shed your fears, ask questions where you need to ask," he said.

"Have you asked the chief minister that in four months you failed to perform your constitutional duty and never briefed the governor once, even on Severe Cyclone Bulbul (that hit the coastal districts last month)? Did you ask the chief minister did she ever brief me? You are scared, I have taken a note of it, you think about it, you'll know about it," he said.

Amid almost daily confrontations between Jagdeep Dhankhar and the Trinamool government since he came to the state in July, senior minister Partha Chatterjee had suggested the governor confine himself to visiting the beautiful sites in the state and enjoy the hospitality of the government.

Jagdeep Dhankhar had taken a strong exception to being virtually called a "tourist" and since then have referred to the comment multiple times.

(Except for the headline, this story has not been edited by NDTV staff and is published from a syndicated feed.)
Comments
Jagdeep DhankharMamata Banerjee