Bengal Assembly Election: Clad in her trademark white cotton sari with a black border, she also wrapped a black scarf around her neck, seemingly as a mark of protest. 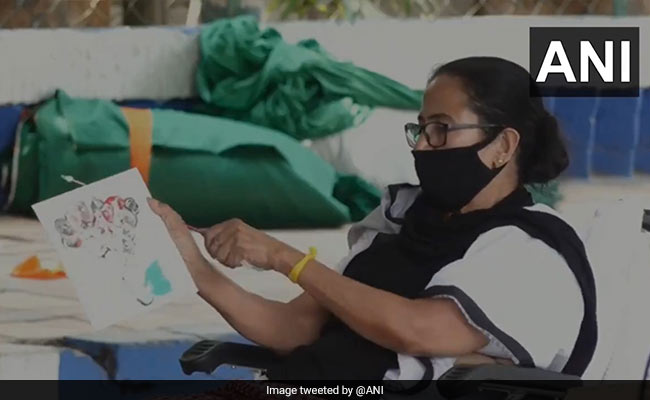 Bengal Election 2021: Mamata Banerjee held up a few of her paintings for reporters.

An uncommon calm prevailed around West Bengal Chief Minister Mamata Banerjee today as she sat in her wheelchair at the Gandhi Murti in Kolkata in protest against her being banned from campaigning for 24 hours. Amid the hullabaloo of the buzzing city, the otherwise feisty leader spent some silent hours practicing her brush strokes.

Clad in her trademark white cotton sari with a black border, she also wrapped a black scarf around her neck, seemingly as a mark of protest. Then there was the black mask, too.

#WATCH | West Bengal CM Mamata Banerjee paints & shows paintings as she sits on dharna at Gandhi Murti in Kolkata, to protest against a 24-hour ban imposed by ECI on her from campaigning from 8 pm of April 12 till 8 pm of April 13 pic.twitter.com/CvKHxTB53d

She arrived at Mayo Road, where the Gandhi stature is located, around 11.40 am and began her sit-in. The Trinamool leader was left alone, with not even party colleagues joining her.

Barricaded from the media, a canopy was raised for her dharna in protest against the Election Commission's decision to impose the ban on her from 8 pm on April 12 till 8 pm on April 13.

A few glances and some head nods are all that she had for media persons standing many feet away. To placate a persistent few, she held up some of her paintings. And then there was silence again.

The poll panel on Monday banned her from campaigning for allegedly making "highly insinuating and provocative remarks laden with the serious potential of the breakdown of law and order and, thereby affecting the election process".

The ban comes in the run up to the fifth phase of Assembly polls in the state on April 17. The Election Commission's move was a "black day for democracy" by her party colleague Derek O'Brien.

"They cannot beat us, that is why they ban us," the Trinamool MP tweeted yesterday, referring to the Election Commission as "Extremely Compromised".

Leaders of other political parties, too, strongly reacted against the poll body's action. Abhijit Banerjee of the Congress said, "Banning Mamata Banerjee from campaigning for the next 24 hours while ignoring hate speeches of BJP leaders is nothing but a naked display of favouritism by the Chief Election Commissioner Sunil Arora."

The fifth and sixth phases of the West Bengal Assembly polls will take place on April 17 and April 22.

A defence official told PTI, meanwhile, that the area where Ms Banerjee was staging her protest belongs to the Army and it was yet to give permission for her protest.