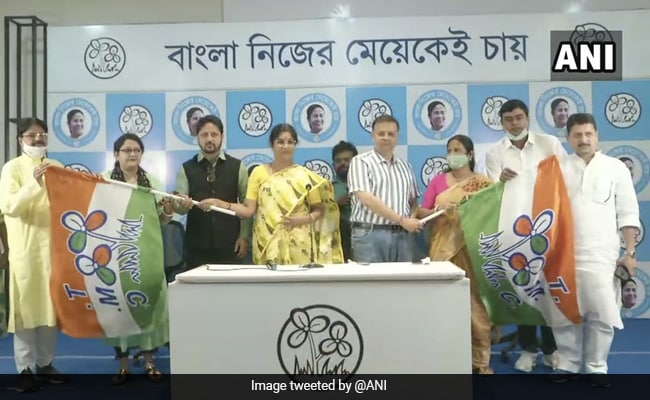 A number of celebs - a popular singer, an actor and an actor-director joined Trinamool Congress in poll-bound West Bengal on Thursday.

Ms Munshi said only TMC supremo Mamata Banerjee thinks or works so much for people in the performing arts and allied fields. The singer said that she will be at the party's service in whichever way it deems fit.

Ms Mukherjee, a popular small screen actor, said only Ms Banerjee can save the state from the "fascist BJP turning it into another Uttar Pradesh.

"If BJP comes to power (in West Bengal) it will decide what you will eat," she said.

The actor said that she had joined the BJP in 2019 after hearing Modi's call of ''Sabka Sath, Sabka Vikas''.

"But it turned out to be a hoax. All those who have humanity should quit that communal party and save the country," she said.

Mr Pandit urged the people to support the "secular, democratic, pro-people" Trinamool Congress, which is seeking to return to power for the third straight time.

Ex-chairperson of the Garulia municipality, Usha Choudhury also joined TMC during the day.

Other Bengali actors Rudranil Ghosh, Yash Dasgupta, Payel Sarkar and Srabanti Chatterjee, joined BJP in the past one month.

After Outrage Over Remarks On Maharana Pratap, BJP Leader Apologises