The family on Sunday walked with hundreds of others down a highway normally clogged with vehicles, their mouths and noses covered with scarves or handkerchiefs or masks. 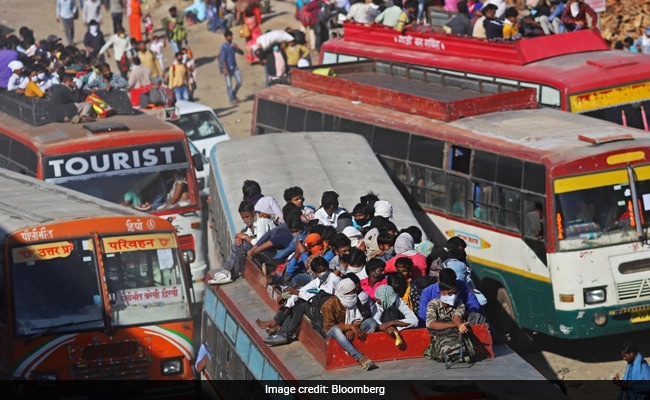 Migrant workers and their families board buses on the outskirts of Delhi on March 29.

In small groups and large crowds, through inner-city lanes and down interstate highways, hundreds of thousands of India's poorest are slowly making a desperate journey on foot back to their villages in a mass exodus unseen since the days immediately after India's independence in 1947.

For many, it's a matter of life and death. Prime Minister Narendra Modi's order last Tuesday to lock down the country for 21 days to prevent the spread of Covid-19 has dried up work in urban areas, leaving many rural migrants who keep the city moving while making less than $2 a day -- construction workers, handymen, food sellers, truck drivers and household help -- suddenly wondering how they'll pay rent or buy food.

"We have to go to our village -- we will starve here," said Rekha Devi as she walked with her husband and two young children down a highway outside of Delhi, heading to see her family some 370 kilometers (270 miles) away. The couple lived on the construction site where they worked, but the job stopped suddenly more than a week ago.

"We haven't eaten for two days," Devi said, noting that the little money they had saved quickly ran out. "We are scared of this disease but I think hunger will kill us. We will stay hungry, but how can we watch our children starve?"

The family on Sunday walked with hundreds of others down a highway normally clogged with vehicles, their mouths and noses covered with scarves or handkerchiefs or masks. They clasped their children and belongings -- tattered duffel bags stuffed with clothes, buckets filled with cooking utensils, blankets and sheets.

The grim scenes playing out across the nation of 1.3 billion people are some of the worst across the world since the virus crisis shut down much of the global economy. In India, it's brought back memories of the mass migration sparked by deadly religious riots when the subcontinent was split up after the British left in 1947. These days, however, the divide is largely between those in India with money and those who live month by month, or even day by day. 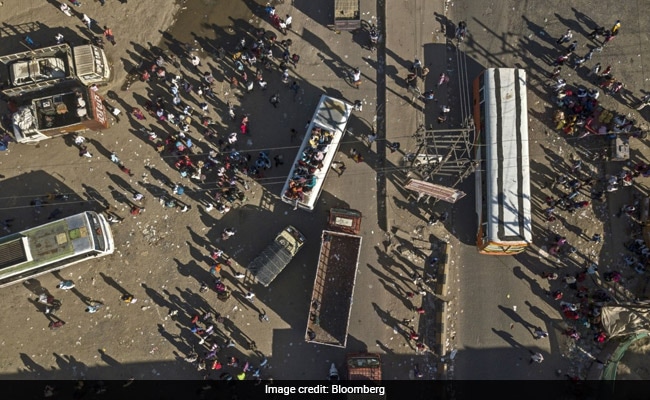 Migrant workers and their families board buses during a lockdown imposed due to the coronavirus in New Delhi on March 28.

What's worse, the mass movement of people risks speeding the spread of the coronavirus across the country -- undermining the goal of the 21-day lockdown. Right now, it's nearly impossible to tell what will happen because India lacks testing data to determine what stage the pandemic has reached, according to Gagandeep Kang, an infectious disease expert and head of India's Translational Health Science and Technology Institute outside of Delhi.

"Because we are not testing enough, we don't know what this means in terms of disease spread," Kang said. "If very few people are infected today, then they're going home and if they reach home safely then that might be the best thing for them," she added, while saying cases will emerge throughout the country in two to four weeks if many migrants already have Covid-19.

PM Modi last week announced the nationwide lockdown in a prime-time television address, prompting middle-class Indian families to rush to the nearest supermarket to buy food. Panic had been spreading among migrant workers even before PM Modi shuttered India's massive railway network and grounded all domestic and international flights: Smaller, state-wide lockdowns had already hit daily wage earners, prompting hundreds of thousands to cram into trains and buses to reach the safety of their villages.

The government on Sunday asked states to quarantine migrant workers for 14 days and prevent them from traveling elsewhere in the country as the official case toll rose to more than 1,000, including 25 deaths. In a radio address, PM Modi apologized to the nation while urging them to understand he had no other option. His government earlier approved a 1.7 trillion rupee ($23 billion) stimulus package targeted at the poor.

'I Seek Their Forgiveness'

"I had to take certain decisions which have put you in lots of difficulty, especially when I look at my poor brothers and sisters," PM Modi said in a nationwide radio on Sunday. "They must be thinking what kind of prime minister is this who placed us in this difficulty. I seek their forgiveness."

Local media have reported at least 22 deaths already among those trying to reach their villages, some in road accidents and others because of illness or starvation. The chaos reflects a lack of planning by the government reminiscent of PM Modi's move in 2016 to eliminate more than 80% of India's hard currency overnight, according to Michael Kugelman, senior associate for South Asia at the Wilson Center in Washington.

"Surely New Delhi understood that in a country with millions of migrants and a large informal economy, you can't just shut the country down for three weeks and expect everyone to dutifully shelter in place," he said.

In Mumbai, thousands of people trekked towards villages in the interior or in Karnataka more than 600 kilometers away. As the summer temperatures touched nearly 95 Fahrenheit (35 degrees Celsius), some rested under trees along a highway leaving the city.

"Some kind-hearted people gave us food," said one elderly woman, who estimated it would take at least five days to reach her home in Karnataka. "I don't know whether we'll get any more."

As the humanitarian crisis began to unfold in Delhi, the government of neighboring Uttar Pradesh -- India's most-populous state -- sent buses to a crowded station to ferry migrant workers from the outskirts of the Indian capital back to their villages.

On Sunday, Neha Kashyap walked there with her husband and three young children, trying to get a ride after their attempts to find transportation closer to their home had failed. Her husband had a small shop fixing sewing machines and small electrical appliances like blenders, but it closed after work began to dry up and they couldn't make the rent.

"When there is nothing left to eat, what should we stay here and do?" Kashyap said, her eyes welling up with tears. "The government says stay where you are. Tell us what will we eat? How will we feed our children? How will we pay our rent? We have to try and get away."

Around her, police sirens blared as hundreds of others slowly walked down the stretch of road hoping to catch one of the buses heading to Uttar Pradesh. "Keep moving, keep moving," police shouted through microphones. Others beat their batons on the road to hurry on the crowds, and chided volunteers who handed out bananas and pouches of water. "Don't you have any poor people in your own areas to help?" one officer shouted.

If she didn't get her family on one of the buses, Kashyap's only option was to keep walking toward her hometown some 530 kilometers away -- longer than the distance between London and Paris.

"Whatever little our parents have, they will keep us alive -- we have to go no matter what," she said. "Let me tell you one thing: More people will die of hunger than from this disease."