The hospital said re-supply tankers only reached the hospital at around 1.30 pm, meaning that critically ill patients were without oxygen for around 80 minutes

Oxygen crisis in Batra Hospital: Batra ran out of oxygen for the second time in a week (File)

Twelve people, including a doctor, died at Delhi's Batra Hospital on Saturday after the facility ran out of medical oxygen - for the second time in the space of a week - at 11.45 am.

The hospital's Executive Director, Dr Sudhanshu Bankata, said the next 24 hours would be "critical" and that more deaths due to oxygen shortage could not be ruled out.

"These are patients whose oxygen levels sank when supply was low... it is hard to revive such patients. The next 24-48 are hours critical and death toll could be higher," Dr Bankata told NDTV.

"220 patients are currently on oxygen support," he added.

Six of the 12 people who died had been admitted to the hospital's ICU (intensive care unit). The doctor has been identified as Dr RK Himthani, the head of Batra's gastroenterology unit.

Earlier the hospital told the Delhi High Court - holding an 11th day of hearings into a crisis triggered by a massive wave of Covid infections - that 230 people were left without oxygen for 80 minutes.

"We hope no lives were lost," the court responded, to which the hospital said: "We have... including one of our own... one doctor."

One of the patients who died was 64-year-old Kawaljeet Kaur Bhatia.

"My aunt... died because there was no oxygen. Her lungs were very infected. She was on the ventilator. Since 8 am there was oxygen crisis... attendants of patients were running around. We (the family) brought oxygen cylinders..." Ajeet Singh Bhatia, 50, her nephew, told NDTV.

"The government is trying but the pandemic is so big and there are so many patients... Yet I am requesting the government with folded hands to address this issue as soon as possible," he added. 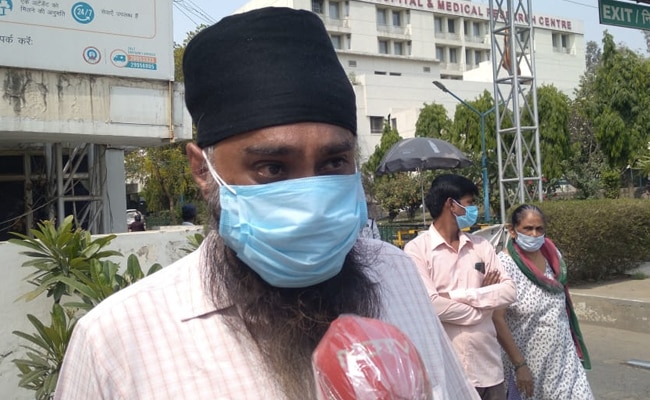 Ajeet Bhatia, 50, spoke to NDTV after his aunt died due to oxygen shortage

Chief Minister Arvind Kejriwal, who has extended the Covid lockdown by a week, expressed sorrow.

"This news is very painful. Their lives could have been saved... by giving oxygen, Delhi should be given its quota (of oxygen, so) such deaths are not seen anymore. Delhi required 976 tonnes and yesterday only 312 was given. How can Delhi breathe?" he asked.

This is the second time in a week that Batra Hospital has run out of medical oxygen. On April 24 the hospital received a last-minute re-supply that arrived minutes after its oxygen reserves ran out.

On being told of the deaths the Delhi High Court slammed the centre: "We mean business... you will arrange everything now. Eight people have died... will we shut our eyes to people dying in Delhi?"

"We direct the centre to ensure Delhi receives its 490 metric tonnes (of medical oxygen) today by whatever means. It falls on the centre to arrange tankers as well. The allocation was made on April 20 and not even one day Delhi has received its allocated supply," the court said.

Delhi has recorded between 24,000 and 28,000 new coronavirus cases per day over the past two weeks, and has also reported record numbers of Covid-related deaths per day.

The city's quota of oxygen had been raised to 490 metric tonnes per day - against an estimated demand of around 700 MT - but supply is only around 400 MT, the state government has said.

Batra is among several hospitals in the city fighting this crippling oxygen shortage.

Last week 25 people at the Jaipur Golden Hospital died due to shortage of medical oxygen.

India has been hit by a devastating wave of Covid infections - daily new cases crossed the four-lakh mark this morning for a record global high. The surge in cases has left hospitals overworked, doctors traumatised, and resources like beds, medicines and oxygen in perilously short supply.

The scale of the crisis has prompted the global community to step in, with oxygen concentrators, tankers and other equipment being flown in by the United States, the United Kingdom, Singapore, the European Union and other countries.

Anthrax Outbreak In Kerala Forest: All You Need To Know