PM Modi also said among the 35,000 policemen who sacrificed their lives serving the nation since independence, 4,000 are from paramilitary forces which include the CISF, CRPF and the BSF among others. 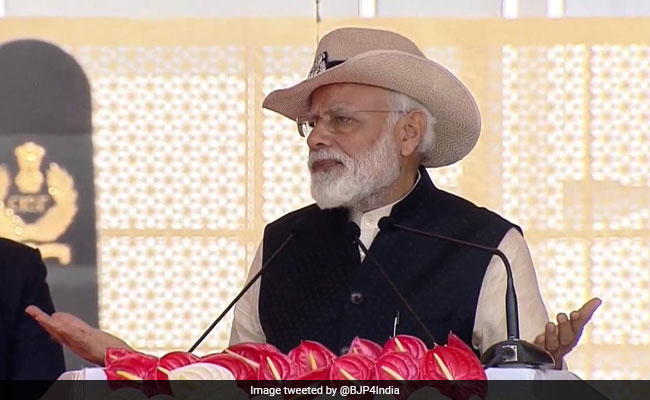 PM Modi at an event organised by the CISF in Ghaziabad.

Prime Minister Narendra Modi today issued a stern warning to terrorist groups operating from Pakistan, warning them against any attempts to destroy the peace in the country.

"Enough is enough," PM Modi said, referring to the terror attacks carried out by Pak-based terror groups in Pulwama and Uri. "We cannot keep suffering till eternity."

The prime minister was addressing an event organised by the Central Industrial Security Force or CISF as the Chief Guest in Ghaziabad. The CISF, PM Modi said, was playing a significant role when the country was facing a "hostile neighbour".

"When the neighbour is very hostile but does not have the capability to fight a war and various conspiracies hatched within the country are getting encouragement from across the border and when the ghastly pictures of terror come to light, under such difficult situations, (ensuring) security of the country and its institutions becomes very challenging," the PM said.

Paid tributes to the martyrs of @CISFHQrs for their outstanding service to the nation. pic.twitter.com/pEMq7urBvS

The prime minister also commented on the "VIP culture" in the country. "This VIP culture sometimes creates hurdle for security. I am saying this as I am a person who follows discipline. Position does not come in the way of disciple for me. And it is the duty of every citizen to be disciplined. If citizens don't maintain discipline, your task gets complicated," he said.

PM Modi also said among the 35,000 policemen who sacrificed their lives serving the nation since independence, 4,000 are from paramilitary forces which include the CISF, CRPF and the BSF among others.

On February 14, a convoy of vehicles carrying CRPF personnel was attacked by a suicide bomber in the Pulwama district of Jammu and Kashmir, killing 40 jawans. The attack was claimed by Jaish-e-Mohammad, which is based in Pakistan. Following the attack, India destroyed JeM terrorists camp in air strike inside Pakistan.