Latur, Maharashtra: As one enters the Grand Hotel in Maharashtra's Latur city, a lush green lawn immediately grabs attention. The old gardener quietly goes about his work, watering the lawn. Just then, a vehicle comes in, empties the water in an underground tank below the lawn and leaves.

The scene is in stark contrast to images on television, highlighting the unprecedented water crisis in Latur, which has emerged as the face of the drought situation in the state's Marathwada region.

While one would think that every drop counts, the well-nourished wedding lawns and manicured gardens at hotels in the city raise serious questions.

"It's a shame and insensitivity. You have the money, you get the water. That's exactly how it works. And there are several such green spots. Is this what people call emergency use?" asks activist Amol Gowande. "And this is happening right opposite the Collector's office."

The Grand Hotel, however, claimed they were using recycled water. "We require four tankers every day as we have to maintain the property. And water is not being used directly for the lawns. This is treated sewage water which is recycled," claimed Jude Monteiro, the manager of the hotel.

The district administration says that clear advisories have been issued to defer all non-essential use of water. "Priority of using any water has to be only for essential needs. Greening of premises can certainly wait," Collector Pandurang Pol said.

On Wednesday, the Bombay High Court, while ordering 13 IPL matches - scheduled next month - to be shifted out of Maharashtra due to the severe water shortage, also questioned if weddings and other events requiring heavy usage of water should be allowed to continue during this crisis.

Latur, scorched by drought, is now relying on special 'water trains' - 10 lakh litres of water have already been supplied to the city. 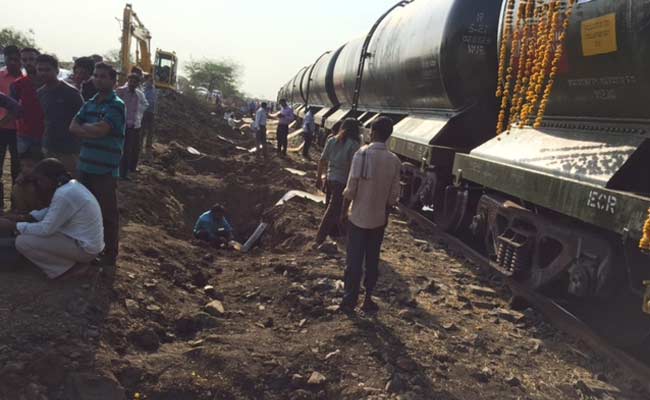 The first 'water train' arrived in Latur, early on Tuesday, to loud cheers from locals

The second train, consisting of 50 wagons, is expected to arrive in the city early next week.