Water around Union Carbide factory in Bhopal is dangerous: Report in Supreme Court 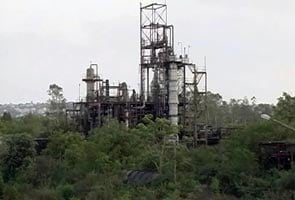 New Delhi: The Supreme Court has been told that the water around the former Union Carbide plant at Bhopal is contaminated and not fit for consumption.

The report was filed today by the Indian Institute of Toxicology Research (IITR), Lucknow, which collected 26 samples from around the factory, from where a poisonous gas leak in 1984 led to the deaths of more than 15,000 people, creating the world's largest industrial disaster. The leak caused irreparable damage to the health of around 50,000 people. NGOs claim that the hazardous waste, abandoned within the factory, continues to endanger the lives of residents of Bhopal.

The results of the levels of chlorine and nitrate in the samples were found to be higher than permissible, said a preliminary report filed in court today by the IITR. Experts will drill within the factory to collect more samples and will share the results in court within the next three months.

NGOs have been petitioning the court to intervene and order the disposal of the toxic chemical waste lying within the abandoned Carbide plant.

On Monday, a German firm claimed that it has withdrawn its offer to remove 350 tonnes of hazardous material from the defunct factory because the Indian government did not offer a contract despite months of negotiations.

The negotiations between the company and the government began in June. In July, a high-level Group of Ministers chaired by Finance Minister P Chidambaram sanctioned a plan to transfer the waste to Germany and allocated Rs. 25 crores (USD 4.5 million) for its airlift and disposal.

Some media reports suggested that talks with the German firm broke down over the question of who would take responsibility for the risks and costs for possible transportation accidents when the waste is en route to the intended site of incineration.