Caught On Camera: Six Men On Bikes Open Fire At A Shop In Rajasthan

Kota Shooting: The entire incident was caught in a CCTV footage. 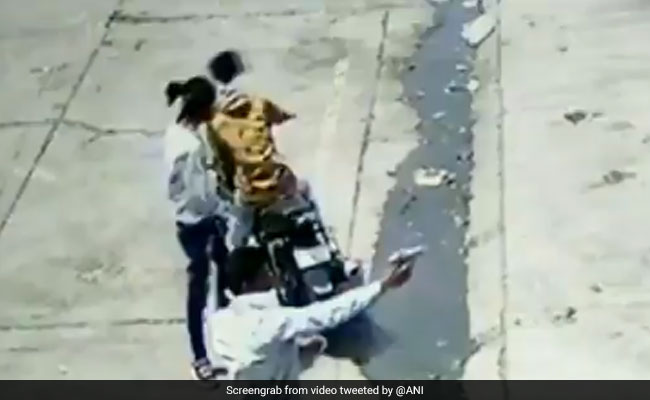 Kota Shooting: Six men can be seen targeting the shop.

A shocking video has surfaced from Rajasthan that shows six men on two bikes targeting a shop. In groups of two, the men can be seen opening fire at the shop in Kota as they stop in a deserted street.

The entire incident - caught in a CCTV footage - took place at a market, about 250 km from state capital Jaipur.

A 38-second clip shows three men, two of them on a bike, stopping near the shop. The third man begins to fire at the shop, which is not visible in the CCTV footage.

Then they are seen calling the other group frantically with hand gestures. The other group drives past the shop, while one of the men continues to fire at the shop.

The video of the incident was shared on Twitter by news agency ANI.

In the tweet, ANI confirmed that the shopkeeper was present in the shop at the time of the attack but he wasn't injured.

It further quoted the police officials as saying, "CCTV footage is being examined and efforts are being made to arrest the accused."

#WATCH | Rajasthan: 6 bike-borne men fired bullets at a shop in the fruits & vegetable market in Gumanpura of Kota y'day. Shop's owner was present inside at the time of incident, he's unhurt.

Police say, "CCTV footage is being examined & efforts being made to arrest the accused" pic.twitter.com/JsKzhytfC8

The incident comes just two weeks after another shooting was caught on camera in Rajasthan. A doctor couple in Bharatpur was shot dead in their car by two men on a bike.

The shooting occurred in a fairly busy area of the city in the evening.

CCTV footage of the incident showed two men on a bike, overtaking the couple at a crossing and then walking to their car. As soon as the husband lowered the window, one of the men fired multiple shots at them. The attackers soon escaped on the bike.