The 'Prachand' helicopter has been tested over Ladakh. It can take out Chinese drones with air-to-air missiles. 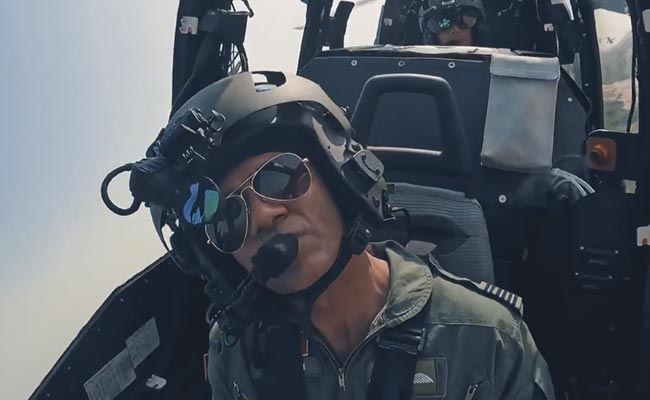 The "Prachand" chopper has been tested over Ladakh.

Soon after inducting the first batch of indigenously developed Light Combat Helicopters, named Prachand, Defence Minister Rajnath Singh shared a cinematic video of the chopper on Twitter with the caption, "Prachand is the name".

The slick video has several close-up shots of the chopper. With a cinematic feel, it shows the aircraft in the hangar, being brought out to the tarmac, pilots inspecting it, and then taking off. The video is set to fast-paced dramatic music.

The video shows the chopper from various angles, including a bird's eye view, 360-degree rotation, flying shots, and also the view from inside the cockpit. Air Force pilots can be seen loading up ammunition into the guns, coordinating while in flight, and firing at a target.

The Light Combat Helicopter (LCH), developed by state-run aerospace major Hindustan Aeronautics Ltd (HAL), has been primarily designed for deployment in high-altitude regions. It was inducted into the IAF at a ceremony in Jodhpur in the presence of Defence Minister Rajnath Singh and Chief of Air Staff Air Chief Marshal VR Chaudhari.

The light combat helicopter over the next several years will be the bedrock of attack helicopter formations in the Indian Army and in the Indian Air Force. The 5.8-tonne twin-engine helicopter has already completed various weapons firing tests, the officials said.

The helicopter can also be deployed in high-altitude bunker-busting operations, counter-insurgency operations in the jungles and urban environments, as well as for supporting ground forces.

The chopper has been tested over Ladakh. It can take out Chinese drones with air-to-air missiles. It can also take out tanks on the ground using air to surface anti tank munitions.