All the evacuated personnel would be provided with the basic amenities and medical facilities during the sea-passage. 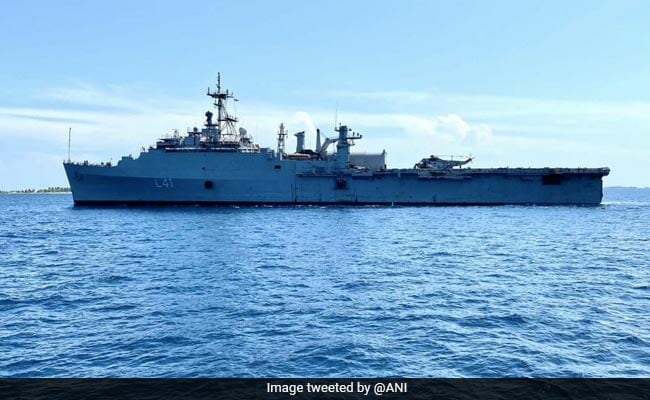 The ship has been suitably provisioned for the evacuation operation, a Navy officer said. (ANI)

INS Jalashwa, the Indian Navy's amphibious warship, has reached Maldives to bring back Indian citizens who have been stranded in the island nation. The warship was sent to Maldives capital Male by the Indian Navy as part of the first phase under operation "Samudra Setu" ( Sea Bridge).

INS Jalashwa is joined by INS Magar in the mission to bring back 1,000 Indian citizens. The ship has been suitably provisioned for the evacuation operation, Navy spokesperson Commander Vivek Madhwal was quoted as saying by news agency ANI. The rescued citizens will have to follow COVID-19-related social distancing norms.

All the evacuated personnel would be provided with the basic amenities and medical facilities during the journey. "In view of the unique challenges associated with COVID-19 stringent protocols have also been stipulated," the Navy spokesperson said. The evacuated personnel will be disembarked at Kochi in Kerala and later handed over to their respective state authorities.

The Navy said the operation is being progressed in close coordination with Ministries of Defence, External Affairs, Home Affairs, Health and various other agencies of the Government of India and State governments.

The Navy has sent a third ship, INS Shardul, to bring back Indian citizens from the UAE.

All the three ships will return to Kochi, the Navy spokesperson said.

Apart from the three Navy ships, the Indian government has sent 64 repatriation flights for a week from May 7 as part of the massive evacuation plan to bring around 15,000 Indian nationals from 12 countries.